UN: Clean Up of Ogoni Land will Take 30 years to Complete 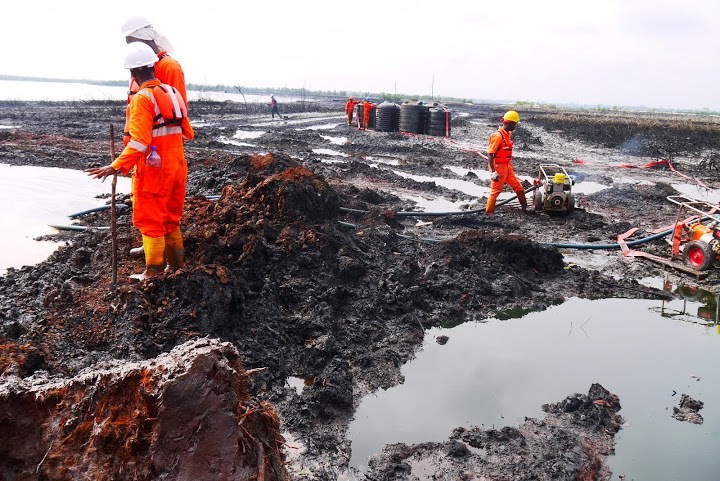 The Ogoni Kingdom (also known as the Ogonis) are one of the many indigenous peoples in the region of southeast Nigeria. They number about 1.5 million people and live in a 404-square-mile (1,050 km2) homeland which they also refer to as Ogoni, or Ogoniland. They share common oil-related environmental problems with the Ijaw people of Niger Delta. The current clean up exercised, flag off by Vice President Yemi Osinbajo, will cost N2.1 Billion. The clean-up is expected to boost socio-economic activities in the ogoniland devastated through years of oil spillage, experts have said.

In a 15-year period from 1976 to 1991 there were reportedly 2,976 oil spills of about 2.1 million barrels of oil in Ogoniland, accounting for about 40% of the total oil spills of the Royal Dutch/Shell company worldwide in one region alone. President Buhari as part of his election plan, promised to effect the clean up of the Ogoniland. So it was no surprise the Clean up event of June 2, which analysts believe is long overdue.

In 1990, under the leadership of activist and environmentalist Ken Saro-Wiwa, the Movement of the Survival of the Ogoni People (MOSOP) planned to take action against the Federal Republic of Nigeria and the oil companies. In October 1990, MOSOP presented The Ogoni Bill of Rights to the government. The Bill hoped to gain political and economic autonomy for the Ogoni people, leaving them in control of the natural resources of Ogoniland protecting against further land degradation. The movement lost steam in 1994 after Saro-Wiwa and several other MOSOP leaders were executed for treason.

In a 2011 assessment of over 200 locations in Ogoniland by the United Nations Environment Programme (UNEP), they found that impacts of the 50 years of oil production in the region extended deeper than previously thought. Because of oil spills, oil flaring, and waste discharge, the alluvial soil of the Niger Delta is no longer viable for agriculture. Furthermore, in many areas that seemed to be unaffected, groundwater was found to have high levels of hydrocarbons or were contaminated with benzene, a carcinogen, at 900 levels above WHO guidelines.

UNEP estimated that it could take up to 30 years to rehabilitate Ogoniland to its full potential and that the first five years of rehabilitation would require funding of about US$1 billion. In 2012, the Nigerian Minister of Petroleum Resources, Deizani Alison-Madueke, announced the establishment of the Hydrocarbon Pollution Restoration Project, which intends to follow the UNEP report suggestions of Ogoniland to prevent further degradation.

Minister of Environment, Amina Mohammed, made paramount the clean up exercise as one of important priorities in this administration. Amina Mohammed, was Senior Adviser on Millennium Development Goals (MDGs) to three different Presidents of Nigeria from 2000 – 2014; served as the Special Adviser on Post-2015 Development Planning to United Nations Secretary-General Ban Ki-moon.

I pray that the restoration of Ogoniland will not only be for the environment but for the health, prosperity and future of the Ogoni people.

This exercise is expected to be the start in the improvement of lives of a people who have contributed to the tremendous wealth of Nigeria.