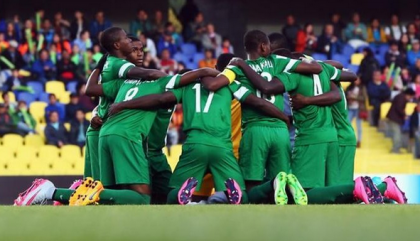 The Nigeria U-20 squad on Sunday flew into Calabar, capital of Cross River State as the football –loving State returns to the front burner of international football action.

Coach Emmanuel Amuneke led a group of 25 players and three officials into Canaan City, as the Flying Eagles intensify preparations for weekend’s 2017 Africa U-20 Cup of Nations qualifying match against the Young Swallows of Burundi.

Calabar is hosting the return leg match this Saturday, which should be a soft session for the African champions, who pipped the Young Swallows 1-0 in Bujumbura two weeks ago.

Just two days after his brace helped the Flying Eagles demolish Nigeria National League side, Shekarau Babes FC in a friendly match played on the artificial pitch of the FIFA Goal Project in Abuja, the winger was again at his imperious best netting twice in the second half as the Emmanuel Amuneke tutored side saw off Amakson Football Academy 3-0 in another friendly match at the weekend at the same venue.

The galloping winger was at his usual slippery best all through the entertaining affair and received huge applause from the crowd, among them players of the National U-17 team currently in Abuja for a screening exercise supervised by team Coach Manu Garba.

Another winger, Orji Okonkwo added the third and final goal, just as he did against Shekarau Babes when he scored the fifth and final goal of the match to see off the Kano based NNL side.

Amakson Football Academy pride itself as a hard nut to crack for National Teams, having had decent results against the U-17, U-20 and U-23 teams in the past.

Friday’s bashing however, did not come as a surprise to fans and the proprietor of the academy, who admitted after the game that his boys lost to a very good team with great potentialities.

The UJ Esuene Stadium, which has played host to several Super Eagles and Golden Eaglets’ international matches over the past few years, will host this weekend’s clash between the Flying Eagles and the Young Swallows. The winner on aggregate will reach the final round of the qualification series for the 2017 Africa U-20 Cup of Nations, where Sudan will be the opposition.

NEWER POSTNigeria Earn First Win In Suwon Tournament Against Honduras, Finishes Third
OLDER POSTSaraki enjoins Muslim faithful to use the Ramadan period to rededicate themselves to the true ideals of Islam