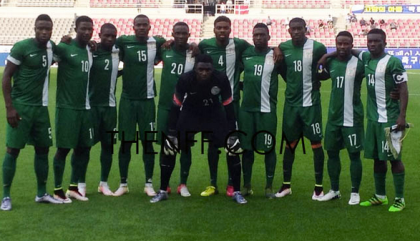 Nigeria finished their deflated Suwon International Youth Tournament campaign with a confident 3-1 victory over Honduras on Monday at the Bucheon Sports Complex to restore some pride despite their failed expedition.

Samson Siasia’s boys into their final game of the knowing they could no longer emerge as champions following defeats to South Korea and Denmark.

However, goals from Azubuike Okechukwu, Godwin Saviour and Keigo Saturday ensured the Dream Team VI at least signed off from the competition with victory, and avoided finishing bottom of the group.

The reigning African U23 champions were far from their glib best on this occasion, but still did enough to earn a comfortable win.

After a borrowing start, Honduras turned up the tempo and Alberth Elis broke the deadlock 17 minutes into the game – a strike which gave the Nigerians a timely reminder of how they were cracked against Denmark.

Nigeria showed more attacking vibrancy during a lukewarm opening, yet it was Honduras who almost got their second courtesy Anthony Lozano.

However, in the second half La Bicolor Olimpica’s resistance was broken ask captain Okechukwu leveled scores in the 61st minute.

That gave Siasia’s lads a sigh of relief as they controlled possession with just under 30 minutes remaining.

Things got worse for Jorge Luis Pinto’s boys in the 69th minute as they conceded a penalty after Ndidi Wilfried was brought down inside their goal area. Saviour took up the responsibility in the 18-yeard box and first past goalkeeper Harold Fonseca.

And Saturday sealed the win for his side with three minutes left to play with a wonder strike from the center of the field that beat Fonseca.

Nigeria U23 will return on later this week as they hope to ring some changes to the squad ahead the 2016 Olympics men’s football event.
original source – Goal.com