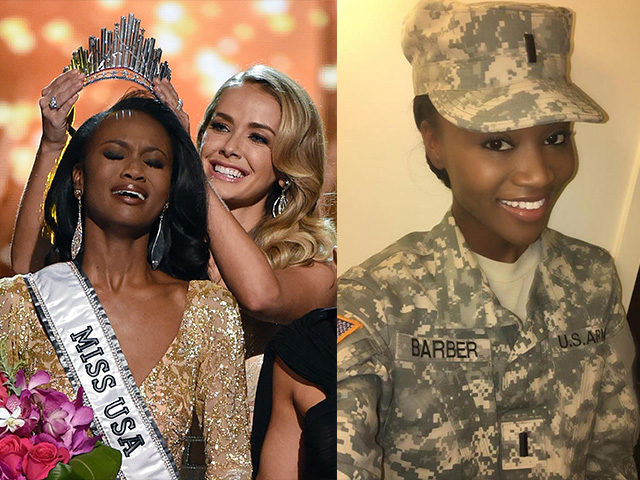 Newly crowned Miss USA 2016, Deshauna Barber, a 26-year-old Army officer from the District of Columbia, is the first-ever military personnel to win the Miss US pageant.

Barber, an Information Technology analyst at the Department of Commerce, triumphed over 51 other contestants, including first runner-up, Chelsea Hardin, representing Hawaii, to claim victory in the annual contest.

She answered the question about women in combat, ” As a woman in the United States Army, I think … we are just as tough as men. As a commander of my unit, I’m powerful, I am dedicated,” Deshauna Barber said. “Gender does not limit us in the United States.” He said.

Barber is an American model, beauty queen and officer in the United States Army Reserve.

She emerged Miss District of Columbia USA 2016 on Dec. 19, 2015, the state she represented at the national pageant.
The new Queen was crowned by outgoing Miss USA, Olivia Jordan of Oklahoma, at the event which was held at the T-Mobile Arena in Las Vegas.
Barber is the eighth African-American woman to wear the crown.

The winner of Sunday’s 2016 Miss USA competition will represent the United States in the 2016 Miss Universe contest later in the year.