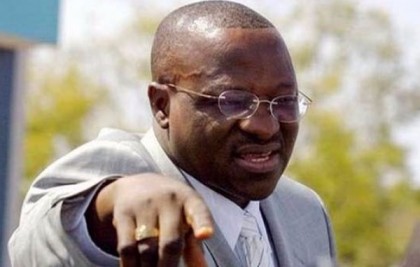 Wilson Uwujeren, Abuja: The trial of a former governor of Plateau State, Joshua Dariye, continued on June 6, 2016 with the Economic and Financial Crimes Commission, EFCC, presenting its tenth witness, as it closed its case against him.

Dariye is being prosecuted by the EFCC, on charges bordering on money laundering and diversion of funds before Justice Adebukola Banjoko of the Federal Capital Territory, FCT, High Court, Gudu, Abuja. He is alleged to have siphoned the state’s ecological fund to the tune of N1.16 billion.

The witness, Kawu Mohammed, an operative at the EFCC’s Asset Forfeiture and Recovery Section, told the court that the unit, which was created in 2009, had the task of executing court orders of interim forfeiture of assets owned by individuals being prosecuted by the EFCC.

“Among the court orders we received was that of Joshua Chibi Dariye, which was an interim forfeiture order pending the determination of the charges against him,” he said.

Identifying the certified true copy of the court order, which were accepted as exhibit W, by the court, Mohammed noted that out of the 11 properties on the list of forfeited properties belonging to Dariye, 10 were in Jos, and one in Abuja.

“We proceeded to Jos, Plateau State for inspection and we were able to trace them but we could not take possession due to security challenges,” he said.

Explaining further, he said: “When we went for inspection of Yelwa Club, one of the properties, we were accosted by some people who trailed us; they came in three motorbikes, and a Peugeot car.”

He further added that: “There was a little drama between them and the mobile policemen that came with me, so I ordered my men to go into the vehicle so that we can avoid unnecessary confrontation.”

According to him, “we were able to take over possession of the property in Abuja belonging to him located at 14 Frederick Chiluba Close, Asokoro and it is being managed by the assets managers of the EFCC.”

He noted that since 2012 the agency has recovered N67 million in rent of the property being managed by the assets managers.
Earlier in the proceedings, prosecution counsel, Tayo Olukotun, who led Mohammed in evidence, told the court that the prosecution had an amended charge dated May 9, 2016, which it would want the court to accept.

Defence counsel, G. S. Pwul, SAN, had no objection to the amended charge.

Count one of the amended charge, reads: “That you Chief Joshua Chibi Dariye on or about 19th July, 2001 at Abuja in the Abuja Judicial Division of the High Court of the Federal Capital Territory while being the Governor of Plateau State and in such capacity entrusted with dominion over certain properties, to wit: the cheque in the sum of N1,161,162,900,000 (One Billion, One Hundred and Sixty-One Million, One Hundred and Sixty-Two Thousand Nine Hundred Naira) which you collected from the Ecological Funds office in Abuja for and on behalf of Plateau State Government and which sum was meant to address the ecological problems of the state committed criminal breach of trust in respect of the said properties when you deposited the cheque with your banker (All States Trust Bank Plc) Abuja branch and cleared same through the said bank where you operated an account in the name of an unregistered company (Ebenezer Retnan Ventures), without paying the cheque into the account of Plateau State Government that it was meant for and you thereby committed an offence punishable under Section 315 of the Penal Code Act, Cap 532, Laws of the Federation of Nigeria, 1990.”

Count 23 reads: “That you Chief Joshua Dariye on or about 19th July, 2001 at Abuja in the Abuja Judicial Division of the High Court of the Federal Capital Teritory while being the Governor of Plateau State and in such capacity entrusted with dominion over certain properties to wit: Plateau State Government Ecological Funds released by the Federal Government of Nigeria to address ecological problems of the state, committed criminal breach of trust in respect of the said property by diverting the sum of N250,000,000 (Two Hundred and Fifty Million Naira) thereof into the private account of a company known as Pinnacle Communications Limited and part of which money was used to purchase for you, Flat 28, Regents Plaza Apartment, 8 Greville Road, London NW8 at the sum of £395,000 (Three Hundred and Ninety Five Thousand Pounds) and you thereby committed an offence punishable under Section 315 of the Penal Code Act Cap 532 Laws of Federation of Nigeria 1990.”

Dariye pleaded not guilty to the 23-count amended charge, when they were read to him.

Olukotun told the court that with the cross-examination of Mohammed, the prosecution was closing its case.

Justice Banjoko, thereafter, adjourned till June 10, 2016 for defence to open its case.