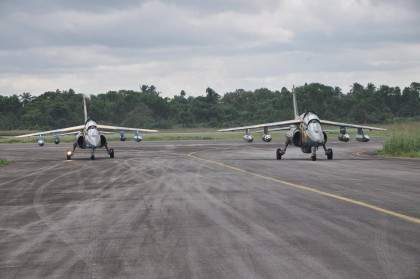 Defense HQ, Abuja: The Nigerian Air Force (NAF) has deployed additional aircraft to the Niger Delta in support of the military operations code named “OPERATION PULO SHIELD” against militancy, economic sabotage and all forms of criminalities in the South-South region of the Country.

The deployment was necessitated by the recent spate of attacks on the Nation’s oil and gas installations by the new militant group, Niger Delta Avengers (NDA).

The additional platforms, comprising fighter aircraft, helicopter gunship and surveillance aircraft, are intended to enhance the capability of the NAF to undertake offensive air operations and intelligence gathering in support of the surfaces forces.

Since the recent deployment the NAF has increased air operations around critical infrastructure in Delta, Bayelsa, Rivers and Akwa Ibom States. These include but not limited to Escravos, Forcados in Delta State; Bonga oil field, Agbami offshore and Brass in Bayelsa; Bony in Rivers; Qua Iboe Terminal in Akwa Ibom State, and Opuekeba in Ondo State.

Meanwhile, the NAF wishes to urge members of the public not to panic at the sight of low level flying aircraft but to go about their legitimate businesses. The NAF also enjoins any member of the public to avail it or other Security Agencies with useful information about the where about or activities of the militant group.