The Federal Government and state governors in the South South political zone on Tuesday agreed to stop military operations in some of the communities of the region. 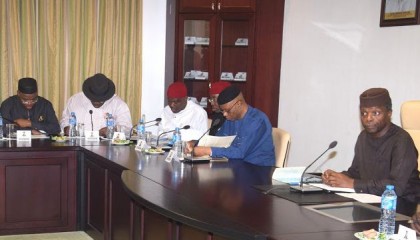 The agreement was reached at a meeting chaired by Vice President Yemi Osinbajo in Abuja.

The meeting was also attended by Service Chiefs, Minister of State for Petroleum, Mr Ibe Kachikwu, and ministers from the Niger Delta region.

“We have taken many decisions which we think will help us to mitigate on what is going on currently, particularly in Delta and Bayelsa.

“We believe that we are going to find solutions very soon.

“One of such is that there is a need for us to share intelligence which is very important.’’

Okowa said the amnesty programme in the region was still in progress.

“I don’t think the amnesty has been put to a stop. I think the process is still ongoing, we have a special adviser in charge of amnesty and he is doing a lot.”

The governor said the outcome of the meeting would be implemented immediately, adding that more collaborative meetings between the federal government, states in the Niger Delta region and other stakeholders would continue.

Gov. Adams Oshimhole of Edo also said: “we agreed that we should work together to refocus on development, economic, military and community issues.

He said the amnesty programme was on although there was a new leadership and a time lag.

“I believe the government recognises that the amnesty programme has to be sustained.We can improve on it because we have trained people.