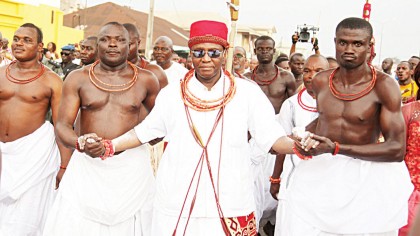 The News Agency of Nigeria (NAN) reports that the burial rites, which lasted for 15 days as announced by the Iyase (Prime minister) of Benin Kingdom, Chief Sam Igbe began on May 25, and was rounded up on Wednesday morning.

The traditional groups, which included Iwebo, Ibiwe, Iwase,and Iwegua among others took their turns to pay obeisance to the Eheneden, who is the Edaiken of Uselu during the wake keep with incantations.

The wake keep which began on Tuesday 12 midnight, saw the crown prince wearing a traditional white attire and going round designated spots within the palace ground before he departed for his palace at Uselu on Wednesday morning.

NAN reports that a number of cultural group and musicians performed all through the night while guests were entertained with assorted drinks and foods.

Photojournalists were, however, not allowed to record the scene where the Crown prince performed the `Isuerhafua’’ ceremony as he recited incantations while moving round the designated spots within the palace ground
Meanwhile, a palace statement by Donald Odwmingie said the funeral rites in honour of Oba of Benin were concluded with the Isuerhanfue rites of passage.

It said the Heir apparent to the throne whose sole responsibility it was to perform all the rites of passage in consonance with laid down procedures, observed Isuerhanfue to bring to an end the 15 days royal funeral rites

“One notable feature of Isuerhanfue rite was a mystical ritual dance presentation by the Iweguae palace group to bid the departed Oba a smooth passage to the spirit realm.

“And the unhindered ascension of the Edaiken to the obaship throne of Benin Kingdom.’’

It described “Isuerhanfue’’ as the last ceremony in the burial programme in accordance with tradition.

The event was then proceeded with Ikpowia an all night wake keep attended by dignitaries from all walks of life. (NAN)