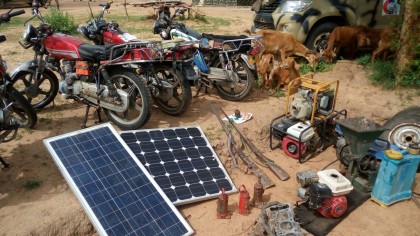 Col. Sani Kukasheka Usman, Abuja: In their determined efforts of clearing remnants of Boko Haram terrorists in their area of operation, today in the early hours of the morning, troops of 156 Task Force Battalion of 29 Task Force Brigade in conjunction with Civilian JTF and local vigilante in the area, conducted a clearance operation to Yajiwa in Alagarno forest. During the operation, 8 Boko Haram terrorists camps beyond Yajiwa were cleared.

The team recovered several items from the camps. These include 2 primed Improvised Explosive Devices (IEDs), 3 Pressure Plates, a 36 Hand Grenade, 2 Dane Guns, 7 Motorcycles and 5 Empty Cases of 12.7mm rounds of ammunition. Others are 1 Damaged Mine Detector, a vehicle and Camel bag.

The troops also recovered a Vehicle top cylinder, a 19.5 tyre rim and 4 size13 tyre rims. Others include a 19.5 rim tyre, 3 tyre jacks, 2 motorcycle tyres and 2 solar panels, as well as 2 small generators, 1 grinding machine, 3 Water pumping machines, 1 Knapsack sprayer and 1 bag of fried groundnut cake.
The IEDs were successfully detonated by the Explosive Ordnance Device team. The troops have since returned to base safely.