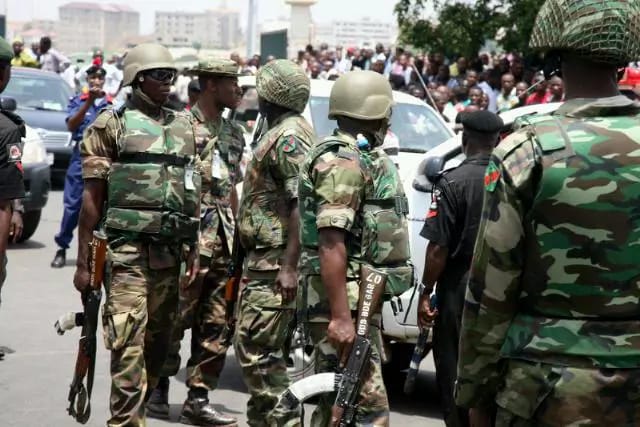 Col. HA Gambo(Enugu): The attention of the 82 Division, Nigerian Army has been drawn to a planned release of report by Amnesty International on the recent violent activities by IPOB and MASSOB on 31st May 2016 in which they were alleging that the Nigerian Army planned the killing of the protesters. This is not true but the usual calculated attempt to rubbish the Security forces in particular and the Nigerian Army just to remain relevant.

For the avoidance of doubt, what transpired that fateful day was that some elements of MASSOB/IPOB engaged in violent protests which led to outright breakdown of law and order.

It should be noted that the Non-governmental organization has always been of the habit of being the judge and jury in matters of our national security without recourse to fairness, objectivity, all aimed at rubbishing the Nigerian Army for reasons best known to them. This could not be far from trying albeit unsuccessfully to be relevant and justify funding.

For the avoidance of doubt, what transpired that fateful day was that some elements of MASSOB/IPOB engaged in violent protests which led to outright breakdown of law and order. The pro-Biafra protesters who had chosen the day to mark the 50th Anniversary of Biafra perpetrated a number of unimaginable atrocities to unhinge the reign of peace, security and stability in several parts of Anambra State.

Two personnel of the Nigeria Police were killed, several soldiers were wounded, a Nigeria Police vehicle was completely burnt down while another of the Nigerian Army was vandalized. The strategic Niger Bridge at Onitsha was at the verge of being captured particularly with the coordinated reinforcement of the violent protesters from the Asaba end of the Bridge. In addition, wanton destruction of lives and properties were brazenly carried out by the protesters who employed firearms, crude weapons as well as other volatile cocktails such as acid and dynamites. In consequence, law, order and security were grossly threatened across the State and beyond.

A number of persons were selected for attack, killed and burnt. Two personnel of the Nigeria Police were killed, several soldiers were wounded, a Nigeria Police vehicle was completely burnt down while another of the Nigerian Army was vandalized. The strategic Niger Bridge at Onitsha was at the verge of being captured particularly with the coordinated reinforcement of the violent protesters from the Asaba end of the Bridge. In addition, wanton destruction of lives and properties were brazenly carried out by the protesters who employed firearms, crude weapons as well as other volatile cocktails such as acid and dynamites. In consequence, law, order and security were grossly threatened across the State and beyond. 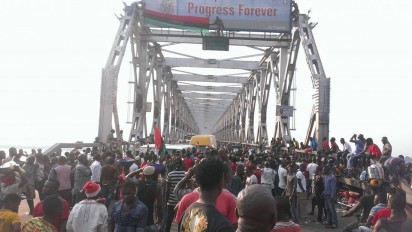 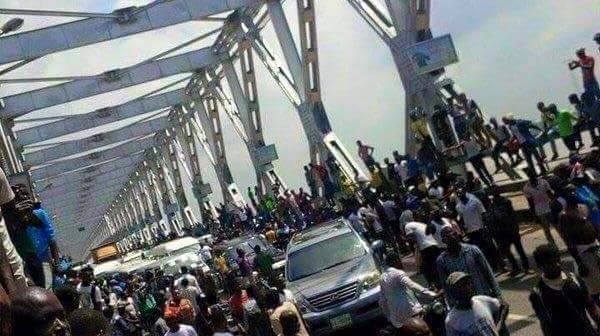 It is rather inconceivable for any individual or group to have decided to inundate the general public with an anecdote of unverified narratives in order to discredit the Nigerian Army in the course of carrying out its constitutional duties despite the premeditated and unprovoked attacks in the hands of the violent pro-Biafra mob as Amnesty International is determined to do.

An on-the-ground investigation by Amnesty International has confirmed that the Nigerian army gunned down unarmed people ahead of last month’s planned pro-Biafran commemoration events in Onitsha, Anambra state.

Evidence gathered from eyewitnesses, morgues and hospitals confirms that between 29-30 May 2016, the Nigerian military opened fire on members of the Indigenous people of Biafra (IPOB), supporters and bystanders at three locations in the town.

Amnesty International has received reports from various sources on the ground alleging that at least 40 people were killed and more than 50 injured.

“Opening fire on peaceful IPOB supporters and bystanders who clearly posed no threat to anyone is an outrageous use of unnecessary and excessive force and resulted in multiple deaths and injuries. In one incident one person was shot dead after the authorities burst in on them while they slept,” said M.K. Ibrahim, Country Director of Amnesty International Nigeria.

“These shootings, some of which may amount to extrajudicial executions, must be urgently and independently investigated and anyone suspected of criminal responsibility must be brought to justice.”

The exact number of deaths is unknown, partly due to the fact that the Nigerian army took away corpses and the injured.

Amnesty International has received reports from various sources on the ground alleging that at least 40 people were killed and more than 50 injured.

After visits to hospitals and morgues, the organization has confirmed – based on this initial investigation – that at least 17 people were killed and nearly 50 injured. The real number is likely to be higher.

Some of the dead and injured IPOB supporters seen by an Amnesty International researcher were shot in the back, an indication that they were fleeing the scene when they were shot.

The leadership of IPOB claim more than 50 of their members were killed. The Nigerian army has said in a statement that they acted in self-defence, and five IPOB members were killed. However, Amnesty International has seen no evidence that the killings were necessary to protect life. Although the police also claim that IPOB supporters killed two policemen the next day in neighbouring Asaba, Delta state, Amnesty International cannot confirm this claim. However, such killings would not substantiate the army’s argument they acted in self-defence.

A joint security operation was carried out by the Nigerian army, police and navy between the night of 29 May and throughout 30May, apparently intended to prevent a march by IPOB members from the Nkpor motor park to a nearby field for a rally. Before the march began the military raided homes and a church where IPOB members were sleeping.

IPOB supporters told Amnesty International that hundreds of people who had come from neighbouring states, were asleep in the St Edmunds Catholic church when soldiers stormed the compound on 29 May.

A 32-year-old hair dresser who was in the church told Amnesty International: “At about midnight we heard someone banging the door. We refused to open the door but they forced the door open and started throwing teargas. They also started shooting inside the compound. People were running to escape. I saw one guy shot in the stomach. He fell down but the teargas could not allow people to help him. I did not know what happened to the guy as I escaped and ran away.”

Another witness told Amnesty International that on the morning of 30 Mayhe saw soldiers open fire on a group of around 20 men and boys aged between 15 and 45 at the Nkpor Motor Park on the morning of 30 May. He says that five of them were killed.“I stood about two poles [approximately 100 metres] away from where the men were being shot and killed. I couldn’t quite hear what they were asking the boys, but I saw one boy trying to answer a question. He immediately raised his hands, but the soldiers opened fire…He lay down, lifeless. I saw this myself.”

International law requires the government to promptly investigate unlawful killings with a view to bringing the perpetrators to justice.

The witness described how military officers loaded men with gunshot wounds into one van, and what appeared to be corpses into another.

Later that morning, another witness described how police shot a child bystander as a group of young men protested the shootings, blocking a road and burning tyres along the Eke-Nkpor junction.

He told Amnesty International: “I heard a police siren and everybody started running helter-skelter. I ran away with other people, but before we left, the police fired tear gas at us and shot a boy in my presence. He was just hawking in the street. He wasn’t even there to protest,” he said.

An Amnesty International researcher visited three hospitals in Onitsha and surrounding towns and saw 41 men being treated for gunshot wounds in the stomach, shoulder, leg, back and ankle. The researcher also visited mortuaries in Onitsha and saw five corpses with bullet wounds, all brought in by IPOB members on 30 May.

One witness told Amnesty International that around 30 people were held in the military barracks, while another witness said 23 people who were held in State Criminal Investigation Department were brought to court.

Following the shootings, the military told media sources that the soldiers only opened fire after being shot at first, but Amnesty International’s research has found no evidence to support this. All the people the organization interviewed said that the protesters were not armed; one young man said that he threw stones at the police and military after they shot teargas at the IPOB members. He said the military then fired live ammunition in return.

Information gathered by Amnesty International indicates that the deaths of supporters and members of IPOB was the consequence of excessive, and unnecessary use of force.

International law requires the government to promptly investigate unlawful killings with a view to bringing the perpetrators to justice. Amnesty International is also calling for those IPOB supporters still held in detention without charge to be either immediately charged or released.

“This is not the first time that IPOB supporters have died at the hands of the military. It is becoming a worrying pattern and this incident and others must be immediately investigated,” said M. K. Ibrahim.

“In addition there must be an end to the pattern of increased militarization of crowd control operations as soldiers are frequently deployed to undertake routine policing functions.”