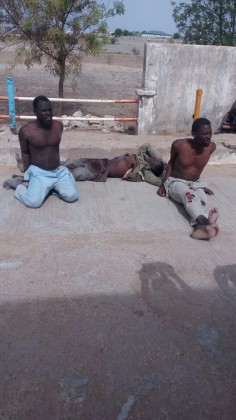 During the encounter, the troops killed 10 Boko Haram terrorists, captured 2 alive and rescued a woman with her baby that were held hostages by the terrorists.

Similarly, another element of the Battalion also conducted another fighting patrol to Wumbi village based on received information on the presence of remnants of Boko Haram terrorists in the area. The patrol team recovered 157 rounds of 7.62mm (NATO) ammunition and 37 rounds of 7.62mm (Special) ammunition.

In a related development, troops of 22 Brigade Garrison intercepted 15 IDPs, all male adults, approaching Dikwa from Mudu Kasa village. They revealed that some Boko Haram terrorists occasionally visit and terrorise their village and forcefully collect food and valuables. They further alleged that the terrorists came in numbers with some of them holding AK-47 rifles, while others wield machetes.

As part of the troops mandate of facilitating humanitarian assistance by both Governmental and Non-governmental Organizations (NGOs) to the IDPs, troops also provided security to International Committee of the Red Cross (ICRC) same day.

The troops provided security to the ICRC’s contractors sinking 5 boreholes around Dikwa IDP camp. They troops would continue to provide the needed security to facilitate humanitarian assistance and activities in the area.