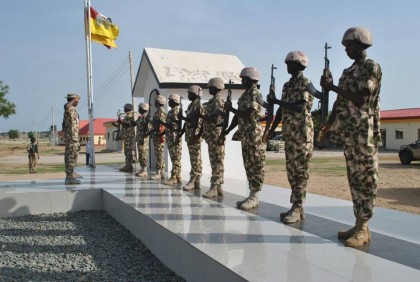 Col. Mustapha Anka, Maiduguri: Troops of 7 Division Nigerian Army have been urged to remain focused, disciplined and committed to duties while routing out insurgents in the North East. The Acting General Officer Commanding (GOC) 7 Division Nigerian Army, Brigadier Generarl Victor Ezugwu stated this while on 3 days operational tour of formations and units within 7 Division Area of Responsibility (AOR).

General Ezugwu while addressing troops of 121 Task Force Battalion Pulka, commended them for the successes recorded by the unit in crushing the Boko Haram Terrorists (BHT) in their locations. He further assured troops that logistics needed for the sustenance of the ongoing operation will be provided. He added that the military is the strength of any nation and urged them to remain dedicated to duty while assuring them that, their efforts will never be in vain.

The Acting GOC thereafter proceeded to Headquarters 26 Task Force Brigade Gwoza where he was received by the Chief of Staff Colonel Mohammed Idris Lawal on behalf of the Commander.

General Ezugwu addressed the troops and used the forum to commend them for the good job during Operation Crackdown. He also delivered goodwill message of the Chief of Army Staff Lieutenant General Tukur Yusuf Buratai for their dedication and hardwork. He further urged them to maintain the fighting spirit in order to achieve the desired end result.

The Acting GOC also visited ‘A’ Company of 143 Rangers Battalion where he commended the troops for their readiness and alertness. He implored the battalion to continue to maintain constant aggressive patrols and ambushes in order to keep the roads safe for commuters traveling from Adamawa State to Gwoza in Borno State.

Similarly, the Acting GOC visited Headquarters 28 Task Force Brigade Mubi Adamawa State where he was received and briefed on their activities by the Brigade Commander Brigadier General Felix Omoigui. General Ezugwu and entourage thereafter proceeded to Bitta where he commended the gallant troops of 114 Task Force Battalion for their steadfastness and doggedness. He charged the troops to continue their routine activities until BHT are completely routed. While in Mubi, the Acting GOC paid a courtesy visit to His Royal Highest the Emir of Mubi Dr Abubakar Isa Ahmadu. In his remarks, General Ezugwu thanked the Emir for his invaluable support to 28 Task Force Brigade and the military in the fight against terrorism. He further sought for more support and useful information to assist security agencies.

The Acting GOC also visited Headquarters 25 Task Force Brigade Damboa where he was received by the Chief of Staff Colonel Louis Lepdung. He praised the troop for their commitment and support during Operation Crackdown. He further stated that, Nigerians are singing praises of the Nigerian Army for their good work. He used the forum to commend them for the successes recorded so far by way of crushing the insurgents within areas of responsibility. General Ezugwu also paid similar visit troop at Askira/Uba and Chibok.

On his way back to Maiduguri, General Ezugwu also visited troops of 251 and 81 Battalions Bulabulin where he had interaction with the Commanding Officers and soldiers of the units. He tasked them to be more vigilant and professional in discharging their constitutional duties, securing their areas of responsibilities and safeguarding Maiduaguri – Damboa – Biu Road.