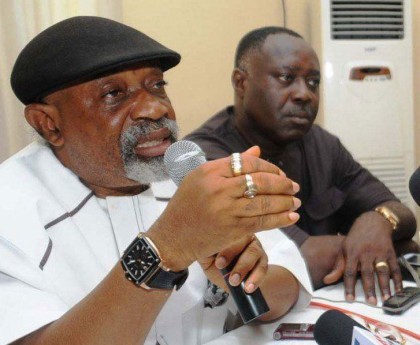 Samuel Olowokere, Abuja: The Ministry of Labour and Employment says the reaction of the Director General of the Nigeria Employers Consultative Assembly (an umbrella body for investors, manufacturers in the private sector) Mr. Segun Oshinowo to the directive of the Federal Government to banks and other financial institutions to suspend the on-going retrenchment of workers in the sector pending the outcome of a conciliatory meeting and stakeholder’s summit billed for the first week of July is not only irresponsible and thoughtless but a bland knee jerk reaction borne out of self service and unpatriotism.

A statement by the Deputy Director, Press in the Federal Ministry of Labour and Employment, Samuel Olowookere said any reaction that tends to hamstrung the intervention by government in any sector of the economy in the overall interest of all Nigerians, by invoking a sudden rigid stricture to free market rules, is an overarching absurdity

” If government has been intervening and shall continue to intervene to save banks and allied institutions, even the aviation industry, in times of distress without allowing the free market rules to solely reign, therefore forcing some of them to go under, the same government can equally make minimum demands from this private sector in the overall interests of the nation. Our authority in this instance is not only statutory but also moral .”

” Therefore, we wish to state clearly once more, that the intention of government rather than being punitive on these financial institutions is to safeguard national interest by staving off unnecessary job losses and hence avert its real and potential threat to the already fragile security situation and stability of the nation.”

” Government intention is guided by the fact that there are clear alternatives to the abrasive lay off of thousands of workers especially in the background of non-compliance with laid down rules on redundancy as clearly enunciated in our labour laws. The labour unions in the financial has brought forward, very strong evidence that thousands of workers laid off last year in a similar excercise are yet to receive their negotiated benefits.

” We wish to state that it is only an irresponsible government that will trivialize such a situation and attendant responsibilities . The Buhari administration is patriotic, nationalistic and very responsible and therefore shall continue to take measures that protect our institutions, private or public as well the people they are meant to serve within the ambit of the law.”

” May we also add that our directives to the banks are premised on set rules of engagement. That section 20 of the labour act is abundantly clear on redundancy and steps expected of institutions to safeguard not just their interests and that of their employees but also that of government who is the chief guarantor of industrial harmony.”

” Verily, financial institutions though ‘privately owned’ are not mere private businesses in the manner of an average shop on the street, rather they are institutions whose stake in the stability of the national economy is denominated by their pivotal roles as well as consequent regulations and oversight by government. It is hence unpatriotic and a predetermined sabotage of common good to expect that government will have its hands tied by a mischievous and self serving credo about free market.”

“The intention of government is that if the private sector is helmed from expansion and new job creation as a result of downturn in the economy, it can at least hold onto what exists by these institutions making little adjustments in the administrative and other expenditure profile . We have made similar patriotic demands from the petroleum sector ( Internal Oil Corporations) and got positive results .”

There is nothing therefore inappropriate or untoward about this demand on the financial institutions except as viewed from the prism of those who are still slumbering in the thoughts and imagination, hamstrung by narrowness of the immediate past, from where they catapulted the nation into the economic jeopardy, with the attendant youth unemployment we are in today. We have invited the banks to a dialogue and we hope the dialogue will be fruitful.