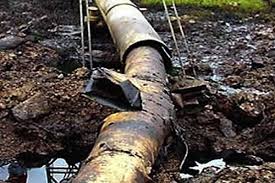 Ogun State Command of the Nigeria Security and Civil Defence Corps (NSCDC) has broken a syndicate that specialises in pipeline vandalism along the Lagos- Ibadan Expressway and recovered a total of nine vehicles and seven motorcycles from the suspects.

The agency, which arrested two suspected members of the syndicate, also recovered about 3, 000 jerry cans during an overnight operation in Oluwo-Ifote Village, Obafemi-Owode Local Government Area of the state.

The two male suspects are Afees Olohunwa, 33, and Ayoola James, 21. Sunday Telegraph gathered that other members of the syndicate fled when NSCDC operatives stormed a thick forest in Oluwo-Ifote, where fuel was being scooped from a vandalised pipeline of the Nigeria National Petroleum Corporation (NNPC).

The State NSCDC Commandant, Akinwande Aboluwoye, who conducted reporters for an on-the-spot assessment of the vandalised pipeline, said the agency raided the forest in the early hours of Friday.

Aboluwoye stated that some of the jerry cans as well as drums had been loaded with Premium Motor Spirit (PMS) and were awaiting transportation out of the site when civil defence men swooped on the suspects. He explained that the suspects consequently fled and abandoned nine vehicles, seven motorcycles, hundreds of empty jerry cans, drilling tools and hose, among other items.

“From main junction to this place (vandalised spot) is about 10km. We arrested two suspects and their jerry cans are still being counted. We have about nine vehicles and seven motorcycles,” he stated.

The commandant said efforts would be made to apprehend the fleeing suspected vandals, adding that those arrested would be charged to court on conclusion of investigation. He also said the NSCDC would notify the NNPC authorities on the need to urgently fix the ruptured pipeline to avert disaster in the area. Aboluwoye warned pipeline vandals to desist from the illegal activities, saying the NSCDC would not hesitate to bring them to justice.

”They should desist from their nefarious activities and do very good job. Here, there are a lot of areas they can cultivate in farming and be more productive, instead of polluting the farmland. Most of the people enga ging in vandalism are young ones; they should be involved in very productive jobs and not this kind of bad job,” he added.