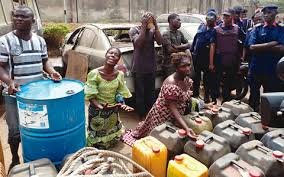 A Federal High Court in Abeokuta, Ogun State has convicted and sentenced one Memunat Mohammed to two years imprisonment for dealing in Premium Motor Spirit, otherwise known as petrol, without lawful authority.

Mohammed was arrested on December 8, 2015 in the Mowe area of Ogun State, during a raid by operatives of the Nigerian Security and Civil Defence Corps.

The convict was said to have been found in possession of 21 jerry cans each containing 50 litres of PMS, which she kept in her house.

She was arraigned by the NSCDC before Justice Adamu Mohammed on charges bordering on dealing in PMS without lawful authority.

The prosecuting counsel for the NSCDC, Mrs. Uzoma Telma, had claimed that Mohammed acted contrary to Section 1(17) (a) (b) of the Miscellaneous Offences Act Cap M17 Laws of the Federation of Nigeria 2004 and was liable to be punished under the same law.

The prosecution also tendered several exhibits, including the 21 jerry cans each filled with 50 litres of PMS as well as the confessional statement of the convict, which the court admitted in evidence against Mohammed.

In a judgment on April 19, Justice Mohammed said he found the testimonies of the three prosecution witnesses credible, noting that the testimonies were not refuted by the defence.