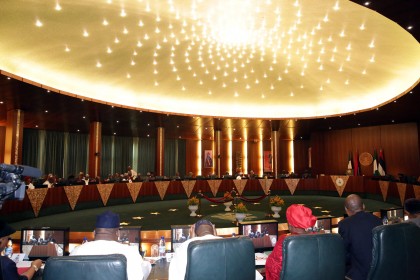 The Federal Executive Council (FEC), on Wednesday, approved a new debt management strategy for 2016 to 2019.

The approval was sequel to a memo presented to the council by the Finance Minister Kemi Adeosun, following the expiration of the previous debt management strategy in 2015.

Adeosun, who spoke with the State House correspondents in Abuja, said that there was the need for a new strategy.

The minister explained that “there is the need for a new strategy for two reasons: one, the previous one had expired.

“Two, the new strategy becomes necessary given the current economic challenges and the economic focus of this government to reposition and diversify the economy’’.

She said that the debt strategy used as its basis, the medium term expenditure framework (MTEF), which was prepared and presented by the Ministry of Budget and National Planning.

Adeosun said that the MTEF assumed that the country would reduce its domestic debt as a percentage of GDP from one per cent to 0.7 per cent by 2019.

The reason, according to her, the administration recognises the need to stimulate the economy in the next three years and provide the basic infrastructure government need to be borrowing.

The minister added that the administration also recorgnised that there was the need to stimulate the private sector for it to grow with lending from the banks.

“So we don’t want government borrowing crowding out the private sector.

“So government has taken a strategic decision that where possible, we will borrow more externally, that is external debt, on dollars and other currencies.

“Because the interest rates are cheaper, the tenures are longer and thirdly it means that there is more room for banks to lend to the private sector, especially small and medium size enterprises’’.

She added that after approving the strategy, FEC issued the guidelines such that as the country would move its debts to dollar, it would need to focus more on non-oil exports.

She said that the discussion focused on how to make exports easier through reforms in the customs and other ministries.

The minister noted that there was demand for solid minerals and agriculture produce but that some of the customs and other quarantine regulations needed to be removed.

“If we do this, it will create foreign exchange earnings, so that when these borrowings that are in dollars are mature for repayment, there will be dollar revenues to pay them.’’

The minister also said that the FEC addressed the issue of multi-lateral loans from such agencies as the World Bank, AfDB and others.

According to her, there are concerns that some of the previous agreements that Nigeria entered into are not optimal.

She said that FEC agreed that since they were not grants but loans, the country should be confident enough to negotiate with the lenders to ensure that the loans are favourable to Nigeria.

“This is a strategy that will determine how we manage our borrowings for the next three years and the polices that will follow.

“The FEC made it clear that we must make sure that our costs are low and that we should manage the risks, especially foreign exchange risks.

“We agreed that it is cheaper to borrow externally but we must hedge, using appropriate instruments as well as driving exports in the non-oil goods.

“It was recognised that there is real demand for Nigerian goods and we need to make it easier for people to export, so that we earn foreign exchange to help the country’s foreign exchange balance’’.

Also speaking, the Minister of State for National Planning, Mrs Zainab Ahmed, said the debt strategy “is a strategy that aligns with the medium term expenditure framework’’.

She stressed the need to move away from short to long term borrowing and to shift government borrowing from the domestic market as much as possible to cheaper external loans.

“The purpose of that is to ensure that the financial system here will have more resources to lend to the real sector and the productive sector,” she added.

Ahmed said that MTEF had a plan to reduce the level of debt from the 2016 status to 25 per cent in the next three years, adding that it was a good plan, which had the support of FEC. (NAN)