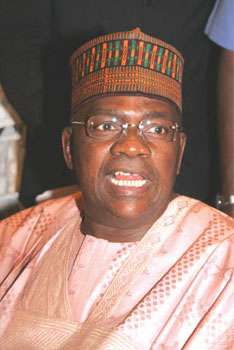 Senator Danjuma Goje, former governor of Gombe State, awarded a contract for supply of dictionaries for over one billion naira (N1billion) to Gombe state Universal Basic Education Board without following procurement process. Furthermore, he was alleged to have paid 85 per cent of the contract sum upfront to the supplier, Real and Integrated Hospitality Company as against the prescribed fifteen per cent as contained in the Board’s guideline when he was the governor.

This revelation was made at the Federal High Court, which sat in Jos yesterday, at the continuation of trial of the senator by the Economic and Financial Crimes Commission. The prosecution witness, Salisu Abaji, who was the former secretary to UBEB made this testimony against his former boss. He further submitted that one Aliyu El-Naffty, former UBEB chairman, also an accused standing trial along with Goje, awarded the contract the same day and ordered the advance payment based on the directive of the senator.
Another prosecution witness and former storekeeper to Gombe state House, Mr. Mohammed Aliyu concluded his testimony by tendering receipts of all payments made to the food contractor to the government during the eight years administration of Goje from 2003 and 2011.
However, Abaji admitted he played a role in the award and payment of the said amount as upfront to the contractor. This he did under cross-examination by the defence counsel, Mr. Adeniyi Akintola.
Meanwhile the trial had been adjourned till October 4 and 5, 2016 by Justice Quadri.
Wilson Uwujaren
Head, Media & Publicity, EFCC