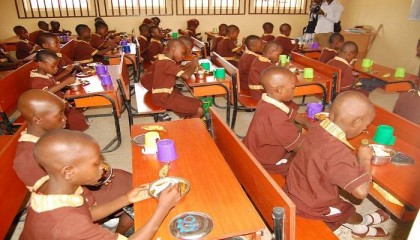 Laolu Akande, Abuja: To ensure the effective implementation of the National Home-grown School Feeding, HGSF, Programme, the Buhari presidency has already provided enough funds in the 2016 budget that will ensure that in the first instance 5.5 million primary school pupils would be served one free hot meal a day.

Making this explanation Tuesday afternoon in Abuja was the Senior Special Assistant, Media & Publicity in the Office of the Vice President, Mr. Laolu Akande, who added that while states are an active participant in the school feeding plan, their counterpart funding is not required to start the programmer’s implementation.

Willing states are however being encouraged to complement the programme so it can reach more pupils, but state governments cannot and will not be compelled to do this. However the support of the states is vital whether they are able to fund in addition to what the FG will do or not, according to the SSA, saying “we want the states to embrace this programme, it is good for the people, it’s a win-win for everyone.”

Akande who was responding to media enquiries and requests for clarifications on the issue stated that “the school feeding programme is not a counter-part funding arrangement model, no. What we have is a plan where the FGN provides 100 % feeding costs for pupils in primary one to three in all public primary schools in the country.”

According to him, “let me be clear about this, the Buhari presidency has made adequate arrangements for the HGSF to happen and by the grace of God, we are going forward to do exactly that.”

But what is interesting, he continued, is the fact that some states have actually gone ahead to start the school feeding programme on their own, while some others are also making such a plan. In that case he noted, “more primary school pupils would be fed in the final analysis.”

If a state is not able to fund the school feeding in Primary 4-6, Akande made it clear that the FG will not abandon such a state but instead go ahead and feed pupils from Primary 1-3.

Specifically he discloses that “5.5 million school children would be fed free of charge for 200 school days in first phase of homegrown school feeding programme starting this year.”

But when the programme is completed, over the course of the elected four year term of the presidency, the number will rise to over 20 million.

At least 5.5 million Nigerian primary school children -ie starting first in
18 states-three per geopolitical zones-would be fed for 200 school days under the free Homegrown School Feeding Programme, as N93.1B has been appropriated for this in the 2016 budget.

The Senior Special Assiatnt explained further that HGSF programme creates jobs along the value chain and improves family and state economies-“because it is a localized menu that is provided for the pupils by the small-holder farmers from within the community who in turn also benefit.”

For example he continued, “a food vendor who to prepares meals for say 100pupils per day, has to interact with small-holder farmers who grow yam, egg, condiments vegetables fruits. She has to interface with transporters as well as sellers of fuel e.tc thereby exchanging income along the value chain.

Besides fully funding the programme for pupils in primaries 1-3, the federal government will also provide technical assistance that will allow states design their context-specific state owned models, Akande said, adding that such assistance comes with partner experience and support in key areas of health education and agriculture, allowing the managers of the program to understand the concept of the “home grown” school feeding.

Regarding how the funds would be disbursed, Akande said the money will come from the federal government coffers and go straight to caterers and other beneficiaries at a rate of N70 per meal.

The school feeding program though a part of the APC manifesto, is also African Union inspired scheme to grow th continent while ensuring pupils go to schools.