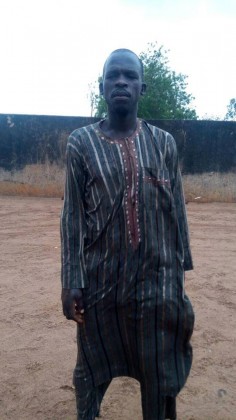 Preliminary investigation confirms that Audu Ahmadu is a Boko Haram Engineer who specializes in repairs of automobiles for the Boko Haram terrorists group. It was further confirmed he was at the garage to repair 2 vehicles. The vehicles were recovered by the team, while the suspects have been taken into custody for onward movement to Joint Interrogation Centre.

The troops pursued them and discovered that they left behind 7 men, 13 women and 27 children that were held hostage at Gemri village. The patrol team also recovered 4 Dane Guns, 3 Bows and 5 packs of arrows containing 114 arrows.

The terrorists camp was destroyed while the rescued persons have been moved to Maiduguri Internally Displaced Persons Camp.
Thank you for your kind and usual cooperation.