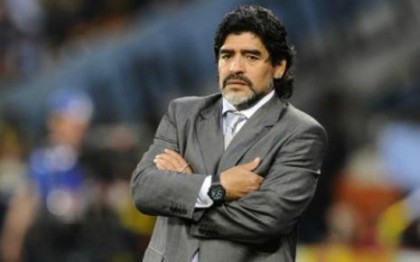 Maradona compared him with a former government official imprisoned for corruption in Argentina, claiming that Blatter has more money
than Jose Lopez.

Lopez was Argentina’s public works secretary during the governments of Nestor Kirchner (2003 to 2007) and his wife Cristina Fernandez (2007 to 2015).

He was arrested on Tuesday while trying to hide millions of dollars in a monastery.

The former World Cup champion asked Loretta Lynch, the U.S. Attorney General investigating corruption within FIFA, to come to Argentina so that she could see things for herself.

He said a former Argentina football executive, Julio Grondona, who is already deceased, was the one who taught Blatter to steal.

“Infantino has asked me to collaborate.

“Both in FIFA and in the AFA (Argentine Football Association) dynamite has to be thrown in so that a fresh start can be made.

“Infantino was saddened. He could not do anything at all from outside of FIFA,’’ Maradona noted.(NAN)