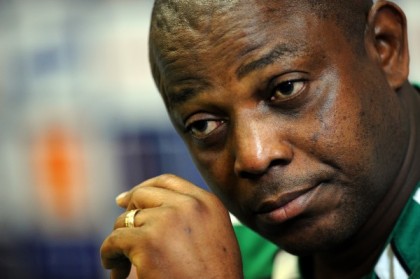 The first son of late Nigeria captain and coach, Stephen Keshi has expressed bewilderment that certain persons have been putting a date forward for his father’s burial rites without the knowledge and consent of his children.

Stephen Keshi Jnr, 27, arrived at the NFF Secretariat and met with the General Secretary, Dr. Mohammed Sanusi. He was in company with US–based chemist and friend of late Keshi, Victor Ugoh and former Super Eagles’ star Victor Obinna Nsofor.

“I just came into Nigeria on Tuesday night, and we read in the papers today that somebody has fixed a date for the burial. I am shocked like my sisters and my brothers. Since our father died, nobody has spoken to us about how he died, and we have not even seen his corpse. Yet, someone is fixing a date for his burial!”

Thenff.com was reliably informed that Keshi’s daughter, Ifeyinwa and husband, who are based in North Carolina, USA also flew into Nigeria on Tuesday.

Keshi Jnr, an events producer in Atlanta, expressed appreciation to the Federal Government, the National Assembly, the Federal Ministry of Youth and Sports, the Nigeria Football Federation, the governments of Edo and Delta States, ex –internationals and countless corporate bodies and individuals for all the kind words showered on his father since he passed on.

“I cannot thank everyone enough. We have only heard good and great words about our father since his death. I am going to Benin City now. The family will sit down and come up with a date for the funeral, but we also appreciate that he was a national figure and will harmonize our plans with that of the Government and the NFF.

“Our father was a loving family man and we will miss him greatly. Our joy is that he left a worthy legacy for Nigeria football and for his family.”