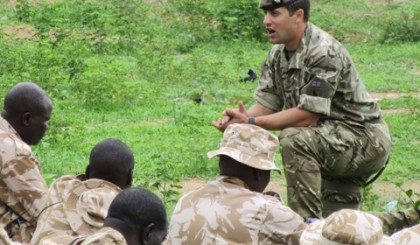 The Nigerian Army said on Saturday that the essence of joint military training with British Military Advisory Training Team was to introduce the military to contemporary training method.

Lt.-Gen. Tukur Buratai, Chief of Army Staff made this known while speaking as the Reviewing Officer at the 74 Regular Recruits Intake Passing Out Parade (POP) held at Depot Nigerian Army, Zaria.

Buratai was represented by the Chief of Administration, Nigerian Army, Maj.-Gen. A. B. Abubakar, said, “The joint military training conducted with the British Military Advisory Training Team is aimed at modernising the initial training.

“This is to ensure that you are introduced to contemporary training method and improvised explosive devise awareness training and survival skills to make you a strong force to be reckoned with.’’

According to the COAS, this training is very important particularly given the security challenges currently confronting the nation.

He charged the newly graduated recruits to exhibit high sense of disciple, loyalty, integrity, selfless service courage and respect for others.

Buratai advised them to imbibe and retain the mental, physical and spiritual training given at Depot and others they would be exposed to at their respective units, formation and corps.

He said that the security challenges confronting the country would soon be a thing of the past as necessary measures were put in place to achieve the set goal.

“Today’s occasion is another milestone in the history of Depot Nigerian Army and indeed the country at large.

“This highly reputable institution established in 1924 has remained pivotal in the production of soldiers for the Nigerian Army.

“The institution provides a platform for the transformation of able bodied young men and women from civilians into combatant soldiers capable of defending the territorial integrity from all threats,’’ he said.

He said realistic training was the best means of preparing the Nigerian Army personnel toward achieving its goals as enshrined in the constitution of the Federal Republic of Nigeria.

Buratai lauded the efforts of management and the entire staff of Depot Nigerian Army for what he described as improvement in every aspect of realistic result oriented training.

“This improved standard is yielding positive results as evident in the robust fighting spirit exhibited by our troops in North-East and excellent display of discipline and coordination witnessed during this raid.

“I am indeed pleased; this institution remained distinguished among its contemporaries within and outside the country.

“I am without any hesitation assure you of my untimely commitment and support toward improving the standard of training and welfare of recruits and staff of Depot Nigerian Army and indeed the Nigerian Army in general,” he said.

The News Agency of Nigeria (NAN) reports that over 2,900 recruits graduated in the 74 regular recruit intake. (NAN)