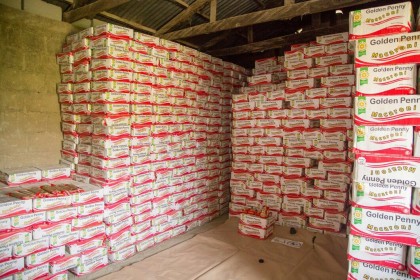 Isa Gusau, Maiduguri: Governor Kashim Shettima has directed the Borno State Command of the Nigeria Police Force and the Department of State Security, DSS‎ to investigate and arrest anyone found culpable in alleged diversion of rice meant for Internally displaced persons which was said to have been supplied by the National Emergency Management Agency, NEMA.

The Governor’s directive follows the circulation of video clip and still pictures on the social media in the last couple of days which shows some bags of rice purportedly from NEMA being re-bagged by officials of the Borno State Emergency Management Agency.

Shettima was speaking when he hosted heads of all security and para-military organizations in Borno State alongside members of the Borno State Executive Council for Ramadan Iftar at the Government House on Friday night.

The Governor noted whereas he would await the outcome of the investigation and quick arrest by the police and the DSS, he was very much aware that a group of Abuja based politicians who hail from Borno State have sworn to bring down his administration using all kinds of mischief including the one of May 29, 2016 when hundreds of his posters were dubiously produced and pasted along strategic ‎points in Abuja and Kaduna claiming that he was aspiring for President in 2019 with the Governor of Imo State, Rochas Okorocha as his running mate.

“When Borno wasn’t safe, they retired to Abuja and completely stayed away and left us but now that peace is emerging, they have lost relevance in their party the PDP and they have started their brand of politics. They know that they can’t take us in terms of performance and their party is crumbling so they have set up an office in Abuja with another one in Maiduguri with some youths hired to furment mischief, they don’t care if the whole of Borno goes into flames so long as they bring Shettima down. They are coming up with all kinds of mischief including trying to set me up against the Presidency, they don’t care if doing that obstructs our success against Boko Haram”, the Governor said.

Shettima recalled that campaign posters with his picture allegedly aspiring for the 2019 Presidency were produced by ‎the political group and pasted on strategic places in Abuja and Kaduna knowing that President Buhari has associates in Abuja, mainly to cause disharmony between the Borno State Government and the Buhari Administration even when they know that doing that can affect the success in the fight against Boko Haram insurgents.

The Governor said the same group worked against harmony between Borno State Government and the Goodluck Jonathan administration and they are repeating the same tactics this time around to stop the ongoing collaboration between Borno and the Buhari Government in the fight against Boko Haram. Shettima reminded no amount of mischief will destroy anyone who has Allah’s protection, noting that Power comes from God almighty and not from mortals. The Governor cited that Prince Audu Abubakar had virtually won the Governorship elections in Kogi, putting so much efforts only for him to die just before he was declared Governor. Shettima added that by the end of the day, Alhaji Yahaya Bello who didn’t take part in the General elections is now Governor of Kogi State because Allah has willed the power to him.

Commenting on his guests for the Iftar, Governor Kashim Shettima paid glowing tribute to the Nigerian Military, Policemen and women, personnel of the DSS, Nigerian Immigration Service, Nigerian Customs, Nigerian Prisons Service, the Civil Defence Corps and the Civilian JTF for their various roles in the fight against insurgency in Borno State since 2009. The Governor said with peace emerging in Borno State, it was necessary for Commissioners to double their efforts in ongoing projects and programmes for the benefit of all citizens.

The General Officer Commanding the Seventh Division of the Nigerian Army in Borno State, Brigadier General Victor Ezugwu ‎thanked Governor Shettima for hosting security heads for the Iftar, noting that they felt highly honored and more motivated to continue their duty of working towards the full restoration of peace in all parts of Borno State. The G.O.C pledged that the security chiefs were determined to ensure a hitch free Ramadan, Sallah and days beyond it through proactive security measures in line with the commitment of Governor Kashim Shettima.

The Attorney-General and Commissioner for Justice who is the Chairman, Forum of Commissioners in Borno State by virtue of his constitutional standing, Barrister Kaka Shehu Lawan pledged the continued loyalty and overriding commitment of the all Commissioners in their dedication to support Governor Kashim Shettima in actualizing his loudable objectives for Borno.