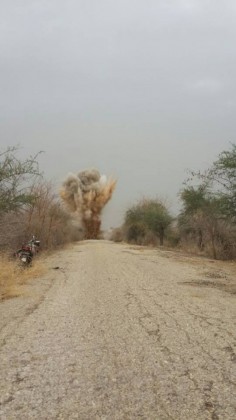 Col. Sani Kukasheka Usman, Abuja: Troops of 114 Task Force Battalion of 28 Task Force Brigade in conjunction with members of vigilante group in an effort to keep the road open and secure, yesterday, Sunday 19th June 2016, carried out a clearance operation along Bitta-Damboa axis.
The troops carried out clearance patrol from Bitta up to Junction point at Gambori village, Borno State. During the operation, the troops encountered Boko Haram terrorists at Bulajani village and successfully cleared and pursued the fleeing Boko Haram terrorists in the area.

Unfortunately, the troops ran into an ambush which was eventually cleared enroute back from the pursuit. Unfortunately, 5 soldiers were wounded in the process and their Buffalo vehicle was badly damaged. The troops killed 4 Boko Haram terrorists, while an unconfirmed number escaped with gun shot wounds.

The patrol recovered 6 bicycles and food storage facility laden with foodstuffs. They also discovered and safely detonated 1 Improvised Explosive Device (IED) at Madube village.
The wounded soldiers have been evacuated to 23 Brigade medical facility in Yola for further treatment.

In a related development, troops of 22 Brigade Garrison accompanied by Civilian JTF also carried out patrol at Albanya village and its environs along Dikwa-Marte axis. The troops encountered Boko Haram terrorists at Sinabaya village which is left of Marte-Kaje road in Dikwa Local Government Area of Borno State.

During the encounter, they killed 3 and apprehended 11 Boko Haram terrorists.

The arrested terrorists have been moved to the Brigade Headquarters for preliminary interrogation and subsequent handing over to the Joint Interrogation Committee.
Similarly, another patrol team from the same unit in conjunction with some elements of Nigerian Security and Civil Defence Corps picketed Dikwa-Mafa-Maiduguri road in order to keep it open and safe against Boko Haram terrorists activities. The same team also escorted International Committee of Red Cross (ICRC) humanitarian materials from Maiduguri to Dikwa and Gamboru Ngala Internally Displaced Persons (IDPs) camps in collaboration with troops of 7 Division Garrison.