Opportunity To Do Right By The Nigerian People – VP Osinbajo 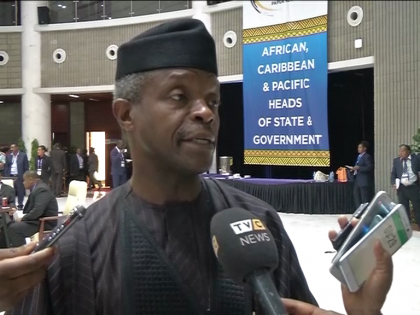 Laolu Akande, Abuja: Although the nation may be passing through difficult times, the Buhari presidency will ensure that the Nigerian people benefit from the resources of the nation.

This indication was given today by Vice President Yemi Osinbajo, SAN, during a courtesy visit by the Australian Foreign Affairs Assistant Secretary, African Branch, Mr. Mathew Neuhaus who was accompanied by the country’s High Commissioner in Nigeria, Mr. Paul Lehmann.

“It is a difficult time, but we think it is an excellent opportunity to do right by the people so that our people are able to get the benefit of the nation’s resources,” says Prof Osinbajo while noting the steps the presidency is making in the areas of security, governance, anti-corruption and the economy.

For instance, he said there has been a liberalization of the oil and gas’ downstream sector and that the flexible foreign exchange policy just recently put in place would encourage foreign investment adding that “we are looking forward to the benefits of the new foreign exchange policy.”
Commending the Australian government for its “excellent support,” in the fight against insurgency in the Northeast, the Vice President observed that while significant progress had been recorded in militarily downgrading Boko Haram, the other challenge now is overcoming the ideology that motivates terrorist activities.

According to him, “we have already dealt with Boko Haram militarily, we now have to deal with the ideology (of terror) and this is something that the entire world has to also deal with. The terrorists basically reject any engagement, simply preaching hate and murder. it is a new kind of threat, the ideology and motivation is what we-the global community- have to find a way to deal with.”

Speaking earlier, Mr. Neuhaus, who had earlier served as his country’s High Commissioner in Nigeria congratulated the Buhari administration observing that the presidency is “off to a good start.”
He also praised the steps that have been taken so far by the administration,some of which he said have not been “easy,” adding that Australia looks forward to doing more with the government and working “very closely with Nigeria.” In particular he mentioned closer relationship in mining and investment, and also cooperating at the Commonwealth and the United Nations.