The Senate on Wednesday directed Secretary to Government of the Federation (SGF), Mr Babachir Lawal, to appear before its Committee on Foreign Affairs over omissions and irregularities in ambassadorial nomination. 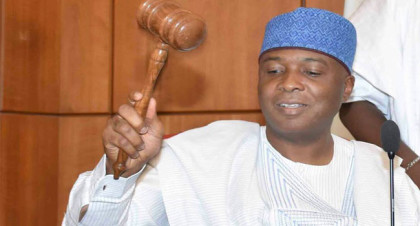 Also summoned with the SGF on the issue is Minister of Foreign Affairs, Mr Geoffrey Onyeama.

This directive followed a Point of Order raised by Sen. Joshua Dariye (PDP-Plateau Central) at plenary which began after a two-hour close-door session.

The lawmakers said that the SGF and the minister would explain the processes that led to selection of nominees before screening of the nominees would commence.

Referring to Order 42 and Order 52, Dariye said that he received complaints about irregularities in the selection of ambassadorial nominees from Plateau and other states.

He said, “given the important role played by ambassadors, due diligence must be given and there should be criteria to nominate qualified Nigerians.

“My request is to invite the minister of foreign affairs and SGF to appear before the committee on foreign affairs to explain this obvious omission and irregularities.’’

Seconding the order, Sen. Olusola Adeyeye (APC-Osun Central) called for the intervention of the Senate in view of numerous petitions with regard to the matter.

He said that there was a need to ensure that the right processes were followed in the selection of the nominees.

“I have been approached by three different people, including one from my state, with the grievance that there were irregularities in the way the names emerged.

“I cannot ascertain that except to say that in the case of two of these people, they are the most qualified from their own states and have been by-passed in this nomination.

“Their own case is that there is nothing in their service record to show that they have not been superb in the discharge of their duties.

“ Two of them are already on level 17 and in making the recommendations, many, who are junior to them in experience and in status have been elevated above them,’’ he said.

Supporting the point of order, Sen. Sunny Ugboji (PDP-Ebonyi) expressed concern that his state was not represented in the nomination.

According to him, we need to invite the minister of foreign affairs and the SGF to explain the modalities used because people even wrote petition to the National Assembly over this issue.

Vice Chairman of the Committee on Foreign affairs, Sen. Shehu Sani, said that the committee had already begun investigation into the matter.

He urged all aggrieved persons to forward their petitions to the committee.

“We have received series of complaints from different states on how skewed the list is.

“The complaints are so much that the credibility of the list is put to question. We are working on those complaints,’’ he said.

In his contribution, Sen. Emmanuel Bwacha (PDP-Taraba South) said that there were laid down procedures for nominating career ambassadors.

He said, “what generates our concern is that the list is for career ambassadors and not political ambassadors.

“I am in agreement with the issue raised and it should be treated holistically.’’

In his remarks, President of the Senate, Dr Bukola Saraki, said that he had equally received petitions from lawmakers and other Nigerians on the omissions in the list.

He called on the committee on foreign affairs to expedite action on the petitions, saying that screening would be suspended pending the outcome of the investigation.

“A number of senators have raised this observation and I have received a lot of petitions on this matter.

“If we say they are career officers we must ensure that the process is transparent, especially as they are going to be ambassadors.

“It is important for the foreign affairs committee to invite the minister and the SGF so that they can explain the processes that led to these names before we begin to consider the nominations,’’ he said.

The order was subsequently unanimously adopted by the lawmakers and the committee was directed to report back to the senate in one week. (NAN)