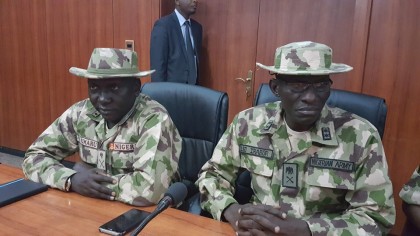 1. The attention of Theatre Command, Operation LAFIYA DOLE has been drawn to some issues in the online Sahara Reporters of 24 June 2016 with a story line on the allegation that the COAS and his wives own some properties in Dubai. The report among other vicious and smear campaign issues, impugned that some ‘concerned officers and soldiers in the North East’ allegedly wrote a petition on the state of affairs in the Operation LAFIYA DOLE. What a baseless, unfounded and wicked insinuation! It is for this reason that I call you today to clear issues as they affect Operation LAFIYA DOLE. The other issue regarding property in Dubai is outside my purview, but has been responded to appropriately by the Acting Director Army Public Relations.

2. For the avoidance of doubt, the Chief of Army Staff (COAS), Lt Gen Tukur Yusuf Buratai, since assumption of office, has taken the affairs of Op LAFIYA DOLE to a level that showed unparalleled commitment to the operational effectiveness and good welfare of troops. For example, between January till now, the COAS has provided various quantities of ammunition types, vehicles and other equipment in the Theatre. He has equally provided uniforms and boots for all the troops in Op LAFIYA DOLE. The payment of allowances and other requirements have been regular and in most cases, up-front. The COAS’ regular visits to the frontline are well known to all. The aggregate impact of the efforts is the huge operational successes being recorded in the Theatre. The morale of troops has equally risen to a level that was never witnessed in the past.

3. The report further imputed that the motorcycles inducted into Op LAFIYA DOLE and employed by the Motorcycle Battalion, were used and refurbished. What a sad tale of lies! When a report of that nature was received earlier, the COAS instituted a high-powered investigation by Military Police. The findings of the investigation team revealed that the motorcycles were brand new and were delivered in crates as knocked-down-parts. The technicians who fixed some of them, failed to tighten some knots firmly which was later rectified. Ever since, the motorcycles have proven useful in various operations.

4. The Motorcycle Battalion comprises trained counter-terrorist personnel, skilled in the use of motorcycles to enhance the capability of own forces to patrol, block routes, picket and pursue any remnants of the BHTs who usually use motorcycles in terrains where four-wheel vehicles cannot manouver. So, this has proved successful in the last major major Operation CRACK DOWN which has practically brought to an end the activities of the BHTs particularly along Maiduguri-Damboa-Biu and Damaturu-Buni Yadi Biu roads, which were opened to the public earlier in the year.

5. I consider this publication as part of the concerted, organised terrorist strategy to distract our winning spirit in the war against BHT. We will not lose traction. That is our resolve. All officers and soldiers in Op LAFIYA DOLE are committed and dogged in this resolve.

6. I call on all well-meaning Nigerians, especially those who reside in the North East, being the direct beneficiaries of the great gains made by troops of Op LAFIYA DOLE under the firm direction of COAS, Lt Gen TY Buratai, to condemn this siege on their conscience. I call you to condemn this callous and irresponsible act. The publication is an attack on the good efforts by the troops of Op LAFIYA DOLE. It should be resisted in its entirety and with the endowments at our disposal.

7. On that note, let me thank the general public and other stakeholders for the huge support rendered to Op LAFIYA DOLE. We remain committed to our mandates and would not be distracted by whatever means.