Defend Your World Title With Integrity 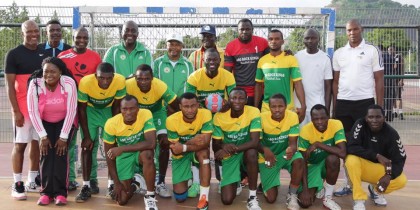 Femi Adesina, Abuja: The Federal Government Saturday in Abuja urged athletes participating in the forthcoming 2016 World Handball Youth Championship in Granollers, Spain to defend their current title with diligence, maturity and integrity.
The State House handball team, Aso Rock Kings, will be representing Nigeria at the 2016 World Handball Youth Championship, which will be held in Spain, June 28th -July 4th, 2016.

Speaking to the team, which had a training session at the National Stadium, the State House Permanent Secretary, Jalal Arabi, told the athletes to remain focus, committed and unwavering in defending the gold trophy they won in Spain last year.

“You are going to come under intense pressure from other teams as the defending champions of the 2015 World Handball Youth Championship, but you must remember the spirit of sportsmanship.

“I have watched your training today, and from what I can see you have justified the two weeks you have spent in camp. More importantly, you have to work very hard to retain the trophy you won last year,” he said.

Arabi assured the team that the Federal Government was fully committed to the development of sports in Nigeria, urging them to work very hard to justify the confidence that had been reposed in them by always upholding the image of their country.
The Permanent Secretary commended the handball team for setting a good precedence of winning an international trophy last year, pointing out that the administration would encourage all the other sports to move into the spotlight through competitions.
“As various sports progress in the State House Sports Club, we will need to strategize to bring them into the spotlight,” he added.

In his remarks, the Coach of the State House handball team, Aminu Ibrahim, said the team had gained lots of experience by participating three times in the same international tournament, and won the gold trophy last year.
He promised that the team would put in their best to retain the trophy.