Messi’s legacy Dented By Third Defeat In A Cup Final 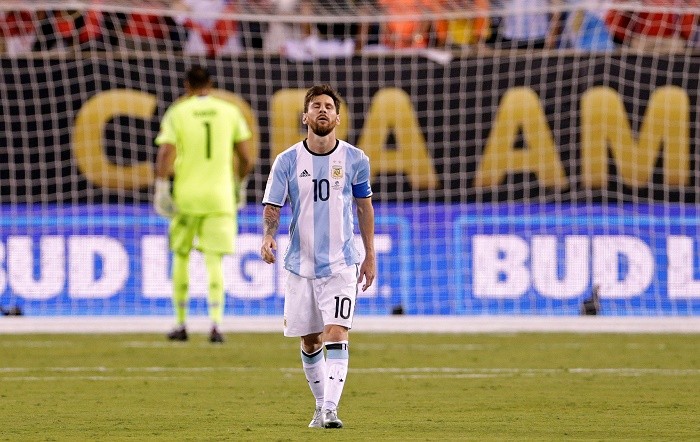 The Argentina No. 10, Lionel Messi may still reckon as one of the greatest player in history of football in the world but there will no doubt that he as failed in three major cup finals to inspire Argentina to victory.

This can be best described as a major blow to the Messi legacy.

Of course, defeat here in New Jersey, nor in the previous two years, can be pinned squarely on his shoulders, just as all of Argentina’s victories cannot merely be put down to the magical No. 10.

But to miss a penalty in the shootout defeat to Chile, having failed to recreate his fine form this summer over 120 minutes, is no doubt a major blot on a usually exquisitely kept copybook.

After Chile missed their first penality kick through midfielder, Arturo Vidal, it was supposed the Argentine and Barcelona legend would step up to give his side a decisive lead.

But he blew a golden opportunity has he threw the ball high over the crossbar and into the stands where the fans were gathered to see him take the lead for Argentina.

Frustration got to him as he declares that he is planning to retire from international football following Argentina’s loss to Chile in the Copa America Centenario final.

“The national team is over for me. That’s four finals [lost]; it’s not for me, The decision is made, I think.” He said.

Sunday’s match finished without a goal and went to a penalty shootout, with Messi missing his spot kick on the way to a 4-2 defeat.

This is the second time in which Chile has beaten Argentina on penalties in the Copa America finals.

The Albiceleste’s loss to Germany in the World Cup final in 2014.

Messi also was part of the Argentina side who lost to Brazil in the final in 2007.

Messi has been locked in a dispute with officials at the Argentine Football Association, taking his frustration to social media prior to the final, but his own performance in Sunday’s final also seemed to be weighing on him after the contest.

He said he feels a great sadness that history is repeating itself and to add to it, he missed a penalty.