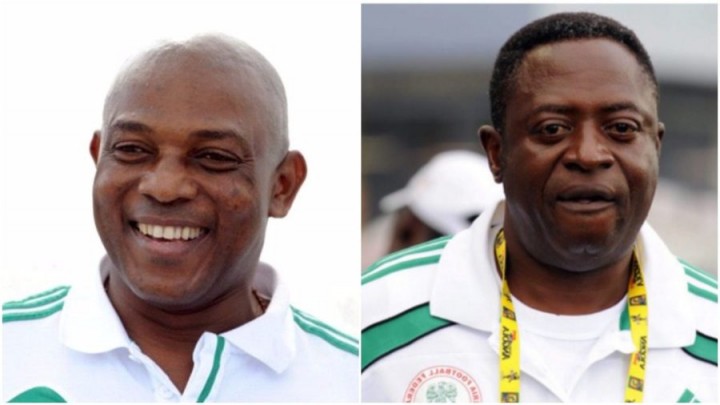 The Lagos state government in conjunction with the Sports Writer’s Association of Nigeria and the Nigeria Football Supporters Club, have set up a committee to oversee the Lagos Farewell Testimonial Match for the two departed former Super Eagles chief coaches, Amodu Shaibu and Stephen Keshi, which has been scheduled for the Teslim Balogun Stadium, Surulere on July 23, 2016.
The Chairman of the committee who is also the President-General of the Nigeria Football Supporters Club, Dr. Rafiu Ladipo, said the event which is meant to raise money for the families of the departed coaches, would also celebrate the two illustrious sons of Nigeria. The money raised would be added to whatever the two families get from other donations across the country.
“The Farewell Testimonial match would see the Super Eagles players battle against Lagos All Stars team in the main match of the day, while the curtain raiser would be a game between the Lagos SWAN team and the Supporters Club. This would be followed by Musical Concert where prominent Nigerian musicians and comedians would perform in the entertainment aspect of the programme. This aspect of the event is coordinated by veteran music act, Chris Mba.”
Ladipo noted that, the involvement of the Lagos State Sports Commission and the Lagos State Governor, Mr. Akinwunmi Ambode, will help boost the goal of the event which is basically fund raising.
The Coordinator of the event, Mr. Effiong Nyong, said yesterday at a media parley organised to announce the plans of the committee that: “Amodu and Keshi must be celebrated with a fanfare as they left solid footprints on the sands of time. It is sad that we won’t see the two indigenous coaches that qualified Nigeria for three editions of the World Cup out of the five the country competed in, again.
“We intend to celebrate Lagos as the state where these coaches were made. Keshi started from St. Finbarrs College in Lagos and also played top international matches as a junior and senior at the National Stadium in Lagos, while for Amodu, as he achieved all the feats at the club and national team levels chose Lagos as his home. He left his family in Lagos to go to Abuja and Benin City to pursue owed monies before he met his death.”
Nyong hinted that the focus of the committee may extend to make the event annual, as the success of the July 23 event will go a long way in determining what happens next.
theNFF