Maduekwe: We Have Lost a Political Colossus, Uncommon Patriot ~ Ekweremadu 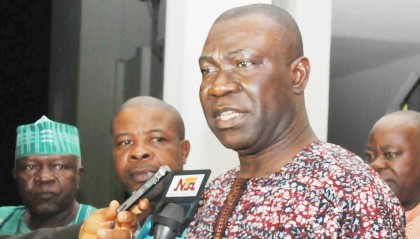 The Deputy President of the Senate, Senator Ike Ekweremadu, has expressed shock and sadness over the death of the former Nigerian High Commissioner to Canada and Secretary of the Peoples Democratic Party (PDP) Board of Trustees, Chief Ojo Maduekwe.

He described the late politician as “a political colossus, public administrator per excellence, and uncommon patriot”.

Senator Ekweremadu who was one of the early callers at the residence of the deceased politician on Wednesday, when the incident happened, said it was still like a dream.

He said late Chief Ojo Maduekwe still had so much to offer to the country.

“It is still too hard to believe. Chief Maduekwe was a repository of knowledge in pubic administration, having served the nation in many capacities; and he was indeed a political oracle, master strategist, and vast in political engineering; it is a sad loss for the PDP in particular at a time we are all counting on his wealth of experience, goodwill, and contacts in the rebuilding process of our great party”, he added.

Ekweremadu prayed for the peaceful repose of the soul of dead and fortitude to Ojo’s immediate family and the nation in general to grapple with the realities of the loss.

Special Adviser (media) to Deputy President of the Senate