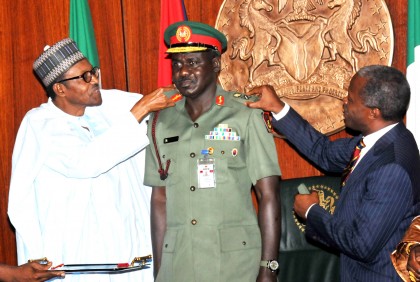 Laolu Akande; Kaduna
Our country at this time needs a new group of elites consisting of professionals in the military who will join in building a new nation built on high values of integrity, justice and diligence, according to President Muhammadu Buhari.

In a speech delivered over the weekend by Vice President, Prof. Yemi Osinbajo, SAN at the Armed Forces Command and Staff College, Jaji, in Kaduna state, the President said “the Armed Forces are probably the most visible symbols of national unity and cohesion,” in the country. Addressing the audience made up of top military chiefs including service chiefs and new graduates of the College’s Senior Course 38, the President told the military, “this is why the responsibility for fighting against all forms of  ethnic and religious prejudices is yours.”

Continuing he explained that “one of the most profound dangers to our democracy and freedom lies in the divisive application of our ethnic and religious diversities. As defenders of the nation’s territorial integrity, we must resist and reject ethno-centricism and religious intolerance. These evils threaten our very existence as a sovereign and indivisible nation.”

In his words, “to build the new Nigeria, we need a new tribe. A tribe of men and women of all faiths, tribe and ethnicities, diverse, but firmly committed to a country run on high values of integrity hard work, justice and love of country.”

He added that “our nation at this time needs an elite consisting of professionals from the military, businessmen, politicians, religious leaders and all others who believe that a new Nigeria is possible. Nigeria needs men and women from the Armed Forces who are prepared to make the sacrifices and self-constraints that are crucial to strong society.”

“This nation needs an elite prepared to stick together, fight corruption and other national ills side by side. An elite who insists on justice even where our friends are at the receiving end,” the President concluded.

Addressing graduands who were drawn from the army, airforce, navy, paramilitary and civilians from the Ministry of Defence, the President also observed that fighting Boko Haram or ISIS is a profound new experience not only for our military, but all over the world, stressing that it is “like what we have never seen before.”

“Our society is more complex and our world is more difficult than ever before. The nature of warfare is also vastly different, consequently the officer of today cannot just be soldier, in any event, being in the military today requires more than just carrying weapons. The officer must be a public intellectual of sorts, a thinker, versatile, dynamic and capable of introspection”.

He told the gathering, which included the Governor of Kaduna State, Mallam Nasir El-Rufai,  the Minister of Defence, Mansur Dan-Ali, Service  Chiefs and other senior military officers, that contemporary military warfare especially the influence of technology like drones has thrown up a huge challenge for the military who must develop the right strategies to deal with what he described as “this future before us”.

The President then commended the management of the college for pursuing appropriate structured courses for the participants to prepare them for command and staff responsibilities in full scale warfare, noting that the graduation ceremony “is a testimony of your hard work and determination to contribute towards the re-professionalization of the Nigerian Armed Forces”.

Also, Vice President Osinbajo while fielding questions from journalists after the ceremony explained that “terrorism  is a major blemish on the nation and our character,” adding that it is important to continue to speak against it and to have concerted efforts on the part of all to deal with it.”

He stated further that by the nature of the unconventional operations of insurgents, there is the demand for appropriate strategies from the military to combat it.