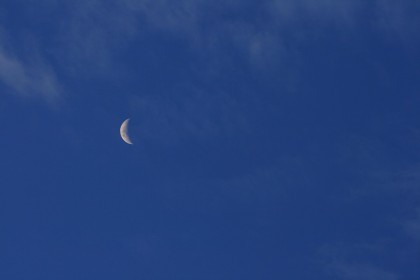 Moon sighting is a duty to every Muslim world over regardless of which month is in question. Most Muslims preferably watch out for the month of Ramadan and Zul-Hijja because of their importance to worship and directive from Allah (SWA) as they are term sacred months. Even though there are other sacred months in Islamic Calendar.

However, the month of Ramadan is always the most month with much attention in all the 12 months in Islamic Calendar.

Every month in the calendar is having 29 days, with an exception of where the 29th night a new moon is not sighted, then complete the month to be 30 days as said in an authentic Hadith.

Over the weekend Sunday precisely the Supreme Council of Islamic Affairs in Nigeria directed the new moon of Shawwal should be on the lookout. If eventually sighted, the next day is suppose to be 1st Shawwal 1437 A.H to mark Eid-Fitr.

Then yesterday night which is the 29th night of Ramadan 1437 A.H, 4th July, 2016, the Sultan of Sokoto, Alhaji Saad Abubakar III directed Muslims in Nigeria to fast on Tuesday 5th July and declared that Eid el-fitr would be observed on Wednesday 6th July. Sambo Wali said, the Chairman, Religious Affairs Committee, Sultanate Council made report available to newsmen in Sokoto. The statement reads that the directive followed the non receipt of any report of the sighting of the new moon of the month of Shawwal from the leaders of religious groups as well as the state and national moon sighting committees. ”Sequel to this development, the sultan has approved the reports of the non sighting of the moon and duly declared that the moon of Ramadan has completed its 30 -day circle.

“Consequently, Wednesday, July 6 is the first day of Shawwal,1437 AH, and Eid-el-Fitr day.”