Muslim faithful in Numbers At The Maiduguri Eid-El-Fitr Prayer

Security was on Wednesday strengthened in Maiduguri and its environs as Muslim faithful thronged prayer grounds in the city for the Eid prayers to mark the end of the holy month of Ramadan. 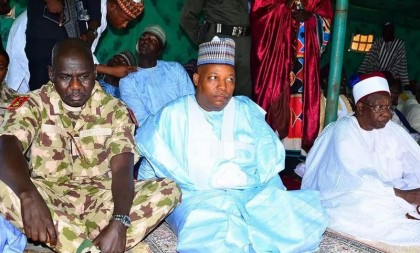 The News Agency of Nigeria (NAN), who monitored security deployment for the celebration, reports that security personnel could be seen stationed at strategic locations in the city to ensure safety of lives and property.

Personnel of the Army’s motorcycle unit were also seen on patrol in parts of the city and paths leading to the Ramat Square – the major prayer ground in the city.

The correspondent also reports that security was specifically tightened in flash-points around the city.

The 7 Division Garrison Intelligence Unit deployed surveillance equipment, including drones, at the various prayer grounds in the city.

It was also observed that the restriction of movement was not imposed on residents of the state.

It was gathered that this is the first time that is happening in six years.

In spite of the tight security, adherents of the Islamic faith came out from different parts of the city in their numbers, to offer prayers at the various praying grounds.

NAN further reports that dignitaries that offered the Eid prayers at the Ramat square include Gov. Kassim Shettima of Borno, the Chief of Army Staff, Lt.-Gen. Tukur Buratai, and the Shehu of Borno, Alh. Umar Garbai Elkanemi.