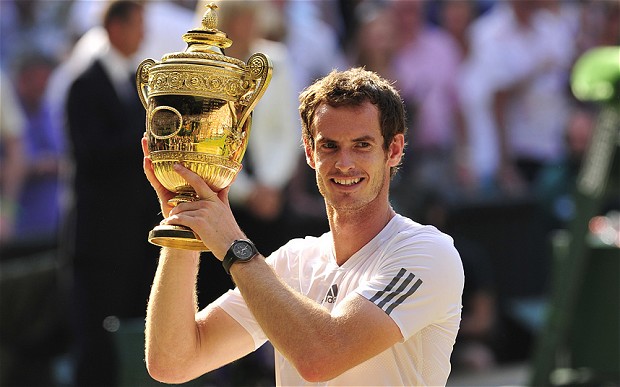 Andy Murray has won his second Wimbledon Men Singles title and his third grand slam of his professional career in tennis.

Murray in his seventh successive match on Centre Court, defeated the sixth seed, Milos Raonic, 6-4, 7-6, 7-6 in two hours and 47 minutes on a pleasant Sunday afternoon with a light breeze whipping around their pristine white shorts.

He became only the 12th man in the Open Era to win Wimbledon twice, adding it to his US Open and Olympic gold medal among other honours.

To think there was a time when it looked as though he might never get there.

How he’s pushed himself, how he’s worked, how he’s exploited every last drop of his wonderful talent.

Murray had earlier reunited with Ivan Lendl as his coach shortly before the start of Wimbledon championship which some say it was a smart move.

His form was already awesome but he’s gone from strength to strength since then.

There can be no argument that he’s a worthy champion. No one has played better.

And he had to be good today, with Raonic a very tough opponent.

Yet Murray got that break in the first set and he played outstanding tennis in the two tie-breaks.

Below is Andy Murray’s Stats:

NEWER POSTControlled Explosion Carried Out On Suspicious Package Found At The France Team Hotel
OLDER POSTWorld No.2 Golfer Withdraws From Rio Due To Fears Over Zika