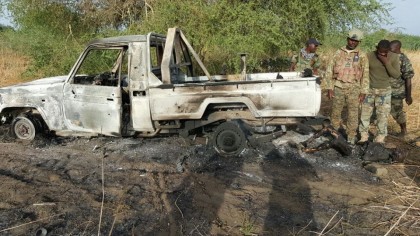 The attack which started at about 6.30pm, was successfully repelled after about 3 hours of exchange of heavy gunfire that inflicted tremendous casualty on the terrorists. Unfortunately, 1 of our gallant soldiers paid the supreme price, while 11 were wounded in action. One of the unit’s Gun truck was badly damaged.

As at this morning, the troops counted 25 bodies of the Boko Haram terrorists and recovered 2 Rocket Propelled Grenade 7 (RPG 7) tubes, a 60mm Mortar tube, 2 Machine Guns, 12 AK-47 rifles and one Light Machine Gun.

The body of the gallant soldiers and those wounded in action are being evacuated while the unit is carrying out mop up operation. Please recalled that the Chief of Army Staff visited the troops’ location on 7th July 2016.