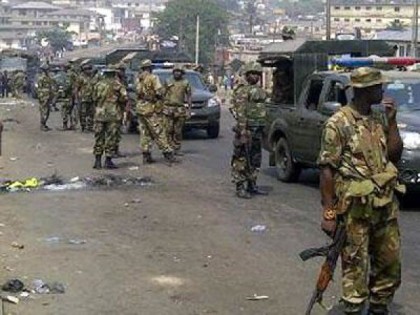 The Nigerian Army said 25 bodies of Boko Haram terrorists had been recovered after Troops of 119 Task Force Battalion stationed in Kangarwa, northern Bornu repelled an attack on Tuesday night.

This is contained in a statement issued on Wednesday by acting Army Spokesman, Sani Usman.

According to the statement, the attack which started at about 6:30 p.m. was successfully repelled after about three hours of exchange of heavy gunfire that inflicted tremendous casualty on the terrorists.

“One soldier died, while 11 others were wounded in action and one of the unit’s Gun truck was badly damaged.

“As at this morning, the troops counted 25 bodies of the Boko Haram terrorists and recovered 2 Rocket Propelled Grenades 7 (RPG 7) tubes, a 60mm Mortar tube, 2 Machine Guns, 12 AK-47 rifles and one Light Machine Gun.

“The body of the gallant soldier and those wounded in action are being evacuated, while the unit is carrying out mop-up operation,’’ it stated.

The News Agency of Nigeria (NAN) reports that Kangarwa had been a stronghold of the insurgents in northern Borno until it was recaptured by the Nigerian forces.

NAN also reports that Kangarwa and its environs used to be the major rallying point for insurgents coming into Nigeria from Niger and Chad.