NAN(Abuja) – The Ahmadu Bello University (ABU), Zaria says it has recorded major breakthroughs following researches it carried out in petrochemicals and automobile engineering.

The Vice-Chancellor of the university, Prof. Ibrahim Garba, disclosed this in Abuja.

He said that the university, with the assistance of the Petroleum Technology Development Fund (PTDF), successfully developed a petroleum refining material called zeolite, using a kind of clay called kaolin.

According to him, zeolite, which is a natural mineral, can be used in refining petroleum products in the country.

He, however, said the mineral was not available in commercial quantity in the country.

“The Petroleum Technology Development Fund (PTDF) has commissioned a research to develop one kind of material that is used in petroleum refining which is called zeolite and there are two types.

“They found that if we can covert certain minerals to zeolite it will help.

“This research has succeeded in converting a clay mineral which is called kaolin to two types of zeolite which can be applicable to petroleum refining.

“The university has even received a patent certificate from former President Goodluck Jonathan.

“It is now ready to go into semi commercialisation to produce it in large quantity and that has been successful.

“PTDF is also ready to join hands with the Raw Material Research and Development Council ((RMRDC) to take it to commercial scale.’’

Garba also said that ABU had developed a mini-refinery in its Chemical Engineering Department to train prospective engineers in the practical aspect of petrochemical engineering.

He said the mini-refinery, which refines one barrel of crude oil per day, was built with the support of RMRDC.

“We also have what we call the Petroleum or petrochemical mini-refinery.

“We developed a small refinery that will refine one barrel of crude oil a day.

“We do not intend to refine petroleum for our own consumption, but because we have a chemical engineering department, we train engineers that would go into the industry.

“We found that in this part of the country, there are no much oil facilities.

“We found that if we develop this mini-refinery, its student, as at when they are really taking their degrees, should be able know the entire working of a refinery.

“It is quite a big edifice that we built and that also came with the support of RMRDC and it is doing very well.’’ 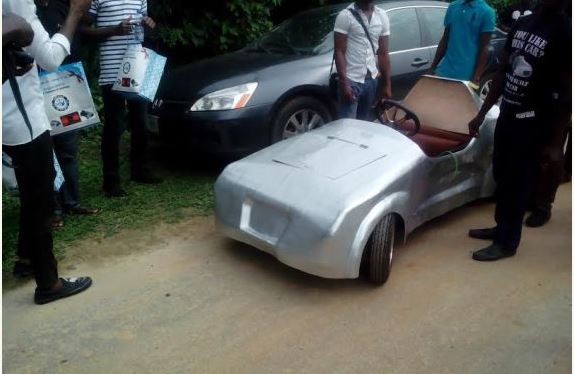 University of Lagos entry in the PTDF Eco-car competition

The vice-chancellor said the institution had also produced an eco-marathon car through a contest organized by Shell globally, challenging universities to produce vehicles that were fuel efficient.

He said that ABU won two awards with its Eco-Marathon Car, adding that both universities of Lagos and Benin participated in the two contests, which ABU’s car came tops.

“There is also another research in the Engineering Department whereby we produce what we call the ABU Eco-marathon car.

”So, ABU has developed one, we participated in two events and we won both that we now have this eco-marathon car”

The Vice-Chancellor did not however state plans for commercialization of these projects, or perhaps partner investors into making each a viable economic enterprise for the school and Nigeria as a whole.