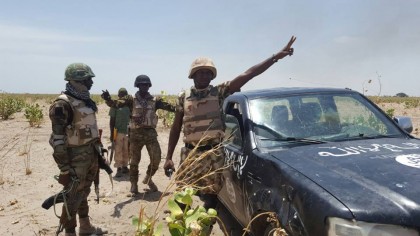 It is in line with that troops of 223 Battalion while on patrol encountered armed bandits at Madaka village, Maru Local Government Area in which they killed 9 armed bandits and recovered 3 AK-47 rifles, 2 AK-47 rifles magazine, 3 rounds of 7.62mm (Special) ammunition, 1 machete and 24 motorcycles.

In a related development, troops have also raided a bandit camp at Gangamai village in Dansadau Local Government Area. During the raid there was an exchange of fire between the troops and the armed bandits. Unfortunately, the bandits escaped with gun shot wounds. However, the troops recovered 2 Dane Guns bags containing marijuana (aka Indian hemp).

NEWER POST#TurkeyCoupAttempt: “Violence Can Never Solve Any Problem But Only Complicates Them” – President Buhari
OLDER POSTBoko Haram In Numbers Attacked Troops In Rann