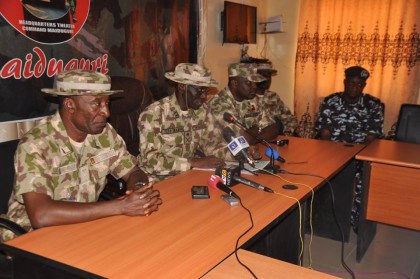 Some of the major operations include the following:
Clearing Operation in MAFA LGA. On 25 Jun 16 at about 1700hrs, own troops at ZABARMARI in conjunction with CJTF conducted clearing operation at MASU YIWA, LADIN BUTA, FAZAKA, KESA GALA, TABLA, FAHINDE, SHIRORI, GIZINA, MASKA ARIBE and MASKA LAWANTI in MAFA LGA. During the operation, own troops encountered BHT at MASKA LAWANTI and successfully cleared the area. As a result, 2 BHT were killed and 2 others were wounded while many escaped with gunshot wounds. Two motorcycles were also destroyed. Sadly, a member of CJTF was killed in action, while a soldier and a policeman were wounded in action. They are responding to treatment in our hospital.

Clearing Patrol to NGOSHE and GAVA. On 28 Jun 16, own troops carried out clearing patrol to NGOSHE and GAVA villages. The troops encountered and killed many BHT on approaching NGOSHE. Sixteen civilians were rescued from NGOSHE. The equipment captured during the operation include one RPG 7 tube, 4 RPG bombs, a GPMG, an FN rifle, 3 AK 47 rifles, an SMG rifle, a locally made pistol, a smoke grenade, 243 rounds of 7.62mm NATO, 2 x AK 47 magazines and a handset. Also captured were a SIM card, a pair of desert camouflage, 3 BHT flags and a Hilux jeep painted in desert colour. Own troops also cleared and searched GAVA village but no hostages were found.

Kangarwa Attack. On 12 Jul 16, at about 1845hrs, own troops at Kangarwa came under BHT attack as they consolidate their hold on the location. Troops fought gallantly killing 25 BHTs and capturing 2 x RPG tubes, 1 x 60mm Mortal tube, 2 x MGs, 12 x AK 47 rifles, 1 x LMG. The following day, during exploitation, additional 3 bodies of BHT were discovered along with other BHT equipment. Sadly, however, we lost an officer and a soldier while 11 others were wounded. All the wounded have been stabilized with 5 of them already returned to the frontlines after treatment.

Ambush. On 14 Jul 16 at about 2300hrs, own troops in conjunction with CJTF carried out ambush east of MARGUBA village. The troops encountered and engaged BHT, killing 2 x BHT while 2 others were wounded. Others escaped with Gunshot wounds and were pursued. During the pursuit, an AK 47 rifle with 29 rounds of 7.62mm special, a bow and some arrows, a Techno mobile phone, a wallet and an ID card were recovered.
Fighting Patrol. On 19 Jul 16 at about 0800hrs, own troops conducted fighting patrol to keep main supply route KUMSHE BANKI road open. During the patrol, 4 BHT armed with bow and arrows attempted to ambush the troops and were accordingly engaged. Three of the BHT were killed while one was captured alive and taken for interrogation. So far, the interrogation has been very fruitful.

Raid/Fighting Patrol. Following intelligence report on the convergence and massing up of dislodged BHT at GARERE village in KUKAWA LGA, own troops conducted a raid at the location on 19 Jul 16. During encounter, 42 BHT were killed while many escaped with gunshot wounds. The items recovered include 504 rounds of 7.62mm NATO, 162 rounds of 7.62mm special, a Land Cruiser Jeep, 34 x Jerry Cans of PMS/AGO and 55 motorcycles which were destroyed. Equally, 38 Women and 42 children were rescued and are being interrogated and profiled.

Ambush of Own Troops. On 20 Jul 16, own troops with some CJTF conducted clearing operation to GONGON village in ALGARNO general area. Own troops destroyed BHT camps and captured a gun truck mounted with an Anti-Aircraft gun, an RPG tube, a Light Machine Gun, 3 AK-47 rifles and other logistics items of the BHT. However, when own troops were returning to their defensive location, they ran into an ambush by BHT who came to reinforce their fleeing comrades. The troops fought back gallantly killing many BHT. Sadly, 16 soldiers and 3 CJTF were wounded in action. Some others, including the Commanding Officer are missing in action. A search party has been despatched. So far, 6 soldiers and 4 x CJTF have rejoined unit. The wounded are stable and responding to treatment. Currently, there are 3 officers and 16 soldiers still missing. Meanwhile, permit me to state that in all our operations, the Air Component have provided the necessary support for their successful conduct. The Air Operations are continuing.

2. Release of Suspected BHT Detainees. On 17 Jul 16 at about 1330hrs, a total of 249 suspected BHT detainees (comprising 169 adult males, 46 adult females and 34 children) were cleared and released from our custody. Among them were 203 persons from 18 LGAs of Borno State and 44 other persons from other States of the Federation. Meanwhile, there were 2 foreigners from Cameroon Republic who were handed over to NIS Borno State Command for further action.

3. I wish to use this medium to indicate that a huge price is being paid by Officers and Soldiers of Operation LAFIYA DOLE. Our hearts go out to all the families of our colleagues who have paid the supreme price. We shall liberate the entire North East from the claws of terrorism and insurgency as our respect to the heroic efforts of these departed colleagues.

Meanwhile, let me use this opportunity to commiserate with the Chief of Defence Staff, Gen AG Olonisakin who lost his cousin in the last operation in Kangarwa. To all families or dependants of our gallant troops wounded and missing in action, I wish to assure that no stone will be left unturned until all are adequately cared for or accounted for as the case may be.

4. On this note, let me very specially appreciate the Chief of Army Staff, Lt Gen TY Buratai, for all the direction and huge support that have made the conduct of operations very effective and efficient.