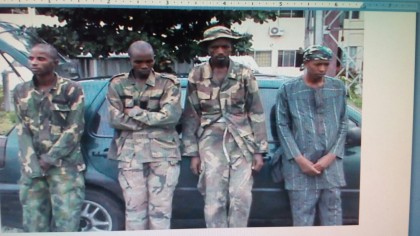 Following the increase in kidnapping in Kogi State, the Department of State Services’ Command intensified efforts towards eliminating the threat. This resulted in the arrest of ten (10) kidnap suspects within the last six (6) weeks.

2.       The public may note that recently, at Koton-Karfe, Kogi LGA, along the Abuja-Lokoja highway, a gang of robbers/kidnappers in military combat uniform was arrested.  Those arrested are:-

3.       An on-the-spot search conducted on the suspects and their vehicle showed that they were in possession of the following items which were also recovered from them:

4.       During investigation, the gang availed information to the existence of three (3) unrecovered AK 47 and other weapons kept in a yet to identified location. Efforts are intensified for the recovery of these weapons. They have also disclosed the source of the military uniforms used during operations. This is already being investigated by appropriate security organizations in liaison with the Service.

5.       Intelligence further revealed that the group has links with other kidnap syndicates operating in FCT, Kaduna, Katsina and Niger States. The gang  admitted carrying out six (6) different robbery/kidnap operations along the Minna-Kontagora road, Niger State; Malumfashi, Mararaba-Jos and Jaji-Zaria roads in Kaduna State.

6.       From these disclosure, it is pertinent to note that some of the perpetrators of crime, especially robbery and kidnapping in Kogi State include outsiders who use the State to further their nefarious acts due to its geographical/topographical peculiarities. The Service is committed to the diligent prosecution of these suspects.

7.       It is in respect of this that the Command will continue to collaborate with other security agencies and stakeholders to stamp out all forms of criminality in the State and its environs. The Command therefore warns all criminal elements to steer clear of the State as the Service and indeed other security agencies have taken advantage of the renewed zeal of the State government’s support and partnership in ensuring law and order within and across the State.