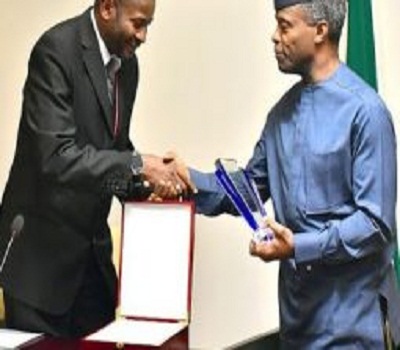 While welcoming members of the Association of Muslim Lawyers who paid him a courtesy visit July 26, 2016, at the Villa, the Vice President, Prof. Yemi Osinbajo has reiterated that Buhari Government is committed to energizing the economy, saying that Nigeria needs a new tribe of people without any bias whatsoever, be it religion or tribe.

Continuing, Osinbajo declared that both the President and himself are committed to a new United Nigeria, populated by a “new tribe” that would be united across otherwise divisive lines.  He stated that most of the time, people use religion and politics to advance self interest.  He stated that the N500B social investment programmes of the Buhari Presidency is a means of energizing the economy and deal with issues of poverty in the country .

According to him, Nigeria needs people who, regardless of their, religion, ethnic group or even agenda, whatever it may be, have the national interest of Nigeria at heart, and believe that every Nigerian needs to be treated and governed properly, even including the ordinary man on the street.  In other words, he expanded that “even the man on the street deserves to benefit from the resources of the country and be accorded his or her due rights.”  It this kind of people that will be able to rescue this country and make things work properly.

Osinbajo stated that “This country is one that should not be divided, either by religious or ethnic issues insisting that, “at this point in time, we don’t need all that”; adding that everyone should be free to practice his or her own faith.  “The most important thing when we come together as a people, is that we must advance Nigeria’s interest”, he said, asserting that the most important issues are the issues that unite us rather than those that divide us.

Speaking further, he said, as a people, Nigerians should be able to answer the question: What is in the best interest of the country?   What can we as a people, drawing from the State’s different values that are represented, do to make this country work?
Addressing the lawyers, he said, it is a privilege to be educated, more so to be a lawyer.  He noted that, “Posterity will ask us, what did we do with all that education, especially during this period of many challenges?

Prof. Osinbajo however, expressed great hope for the country despite the current economic situation, observing that the Buhari regime is in place because it is the will of God, that the regime delivers the goods of the country to all Nigerians and do what is right.   He assured that Nigeria will rise again, step by step, creating opportunities as well as supporting the private sectors and work on export markets.  “Federal Government is working hard to ensure a favorable turn around for the economy”, he said.   Going forward, Prof. Osinbajo insisted that Government is committed to ensuring tolerance among Nigerians as well as work with all the people of Nigeria.

Earlier during the visit, the leader of the delegation, Dr. Kamal .A. Daud expressed the appreciation of the association to the Vice President, who honored their invitation and was represented at a lecture held in his honour entitled ‘Service Above Self’.  Commending the Buhari Presidency, he described the President and the Vice President as distinguished Nigerians indeed, who are not tribalized and who do not discriminate on religious bases.