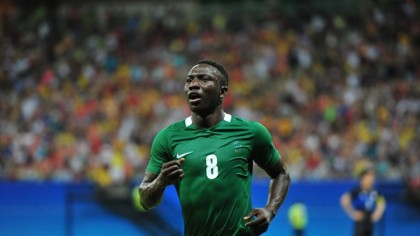 Oghenekaro Etebo, The Star of The Match with Four Goals 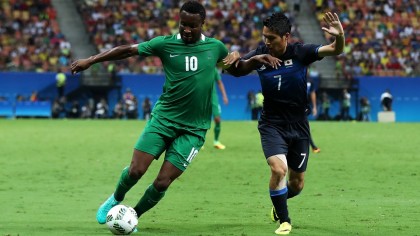 Mikel Obi on the Ball

The Samson Siasia led Dream team VI, who arrived Rio six hours to the game as a result of shabby flight arrangement,  shrugged off jet lag to pocket the maximum three points.

Sadiq Umar put Nigeria in front after only five minutes but the Japanese equalized within three minutes as Shinzo Koroki scored from the penalty spot after Stanley Amuzie was judged to have fouled in the box.

Oghenekaro Etebo put Nigeria back in front, only for Takumi Minamino to equalize again for Japan

But on the 41 minutes mark, Etebo set the tone by putting Nigeria ahead again. Etebo completed his hat trick after 50 minutes and came his forth goal of the night on 65 minutes, making it 5-2 in favour of Nigeria

The Asian champions scored off a fast break in the 70th through Takuma Asano and added another in extra time through Musashi Suzuki, but it was the Nigeria U23 team who ultimately smiled home with the three points.

Oghenekaro Etebo, Nigerian mildfielder was the star of the match as he netted a total of four goals.