Key To Addressing The National Security Challenges In Nigeria 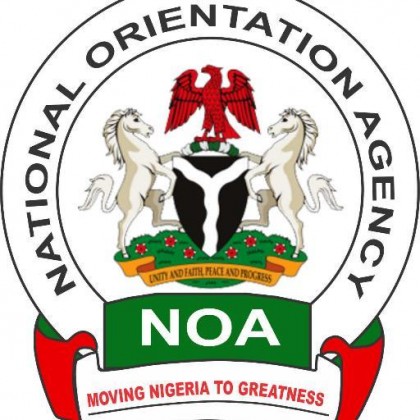 NOA, Abuja: The National Orientation Agency (NOA) has called for open and frank dialogue as the key to addressing the security challenges of the nation, using the media as catalyst for mutual cooperation among citizens to end the crises.

Director General of NOA, Garba Abari made the call during his courtesy visits to media houses in Enugu to underscore the critical role of the media in behavior and opinion molding.

Abari stressed the need for the media to reinvigorate cordial relationships among ethnic groups in the country and put the current national challenges in proper perspective so as to elicit citizens’ cooperation with government. He also urged the media to play a more active role in mobilizing Nigerians for positive response to government’s agricultural initiatives in the light of the importance of food security to the nation.

The NOA boss recalled the culture shock experienced by Nigerian travellers in recent times outside the nation’s shores, where locally acceptable snacks and cultural attires in their possession have led to their arrests, detention and trial in order countries. He said his Agency was working closely with relevant agencies to update the list of international travel prohibited items in a compendium to be made available to prospective Nigerian travellers. Abari was optimistic that the sensitization would help stem the rising cases of innocent Nigerian travellers being embarrassed by their destination or transit nations and called on the media to throw their weight behind the sensitization campaign.

Responding, the Enugu Zonal Director, Federal Radio Corporation of Nigeria (FRCN), Mr. Ike Okere commended the efforts of NOA to keep Nigerians united and abreast of government’s programmes. He was emphatic that it was in no one’s interest for the nation to disintegrate as no part of the country can survive alone and therefore urged all Nigerians to remain firmly committed to the Nigerian project, assuring NOA of continuous support in nation building and orientation.

On his part, the Managing Director, Enugu State Broadcasting Service, Mr. Chukwuma Ogbonna observed that the Service was conscious of the media’s role in public advocacy and remains committed to national ideals and programmes. He said, following recent incidences, the Service had already began sensitizing the people of Enugu on travel prohibited items as a means of cultural and grassroots orientation for cordial international relationships and also pledged for NOA in its drive to keep Nigerians properly oriented.