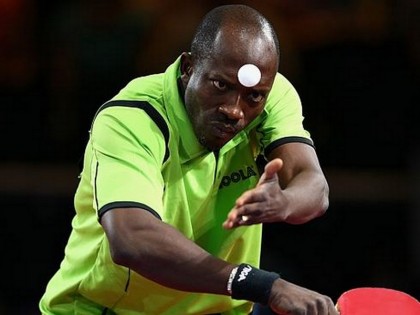 Africa’s Olympic appearance record holder, Segun Toriola, has crashed out of the table tennis men’s singles event of the Rio Olympic Games after losing to Japan’s Nowa Koki in the round two on Sunday.

The 41-year-old, who is appearing at his seventh consecutive Olympic Games, lost 4-2 to the Japanese at the Riocentro Pavilion three.

While Segun Toriola advanced to the second round in the male singles, Funke Oshonaike and Edem Offiong could only go beyond the preliminary round of the women’s singles.

Oshonaike, who led out Team Nigeria during the colourful Olympics opening ceremony crashed out in the Women’s Singles Round 1 after losing 2-4 to 15-year-old Adriana Diaz of Puerto Rico.

Earlier, in the Women’s Singles Preliminary Round, Oshonaike had beaten Mariana Sahakian of Lebanon 4-3 to advance from a tough game.