Nigerian Needs To Evolve Concepts and Ideas To Be Self Reliant 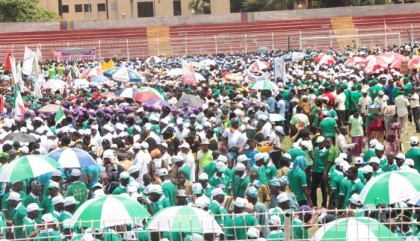 NOA, Abuja: In the light of prevailing national economic difficulties, the National Orientation Agency (NOA) has called on Nigerians to evolve concepts and ideas that will make them economically self-reliant.

Abari said it had become necessary for the two organizations to work more closely in mobilizing Nigerians, especially the youth, to imbibe positive values and generate ideas, both to better their lot and for national development. He said information disseminated to citizens about the current challenges needed to be contextualized as a blessing, rather than a curse, noting that it affords the nation a unique opportunity to reassess its attitudes toward economic management and also to diversify its economic base.

Describing the television as second to the family in 21st century attitudinal molding, Abari stressed the need for Nigerian media to heighten the performance of its advocacy function towards enhanced patriotism. “Citizens can be partners with government in nation building without necessarily being partisan” said the NOA boss, noting that such was the objective the NOA/NTA partnership was pursuing.

On his part, the NTA Director General, Yakubu Mohammed said NTA was counting on the expertise of NOA to supply the narratives for citizens sensitization and mobilization in support of government’s programmes and policies. He noted the long standing partnership between the two organizations, adding that the partnership had the necessary drive to make citizens patriotism possible.