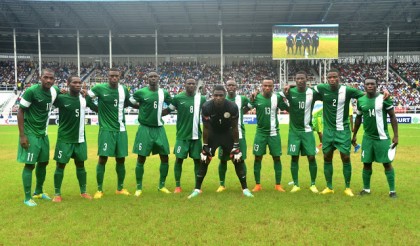 Glory –chasing Nigeria U23 team has arrived in Sao Paulo ahead of Wednesday’s Group B final game against Colombia at the Arena dos Corinthians.

Colombia, who drew 2-2 with Sweden and also with Japan, know they have no choice but to win against Nigeria to reach the last eight. However, Siasia has refused to be distracted beyond the match in Sao Paulo, saying he would finish with the Colombians before thinking of which team his side would have to face in the quarter –finals.

Hosts Brazil, without a goal or a win after two matches, looks the likely candidate but they must overcome Group A leaders Denmark when both teams clash inside Salvador’s Arena Fonte Nova on Wednesday evening.

Dangling forward Sadiq Umar scored once and midfielder Oghenekaro Etebo four times as Nigeria prised all three points from Japan, and Umar was the match winner as European champions Sweden were shut out in Manaus on Sunday.

However, Siasia has disclosed that he intends to rest some of his starters in the game on Wednesday. Speaking to thenff.com in Sao Paulo, Siasia disclosed: “I had to take this decision because we have qualified for the quarter finals as group leaders, and secondly I need to rest some of the starters because in the next phase there is a possibility of going into extra time.

“For now the boys have done well and I need to make the other players justify why I selected them for this tournament. This is not a tea party so everyone must stand up to be counted, and the only way they can be counted is if they play well against Colombia. Resting some starters does not mean we are under –rating the opposition.”

Coach Siasia also disclosed that the technical crew is working hard on the defence line, as the knock –out stages will see stingy defence –lines complemented by vicious attacking lines.

Meanwhile, the Nigeria U23 will for the first time in the tournament, dorn white jerseys in the game against Colombia. The players have already been handed two pairs of white jerseys each, as has been the practice since the commencement of the tournament. Each player is given two pairs of jerseys for each game, so that he can put on a fresh one when coming out for the second half in each game.