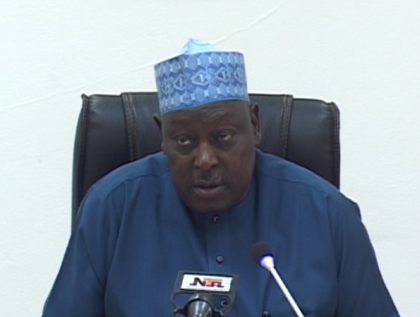 Babachir David Lawal, Secretary to the  Government of the Federation

The Nigerian television authority has been commended for the professional manner in which it propagates the policies and programmes of the federal government. Secretary to the government of the federation, Babachir David Lawal gave the commendation when he granted audience to the management of NTA led by the director general, Mallam Yakubu Ibn Mohammed

The secretary to the government of the federation was particular about the level playing ground NTA gives to the key actors in the governance process, especially the political parties.He urged NTA to initiate programes that will further  give in-dept analysis to what FG is doing for Nigerians especially in its core policy trust areas of Economy, anti-corruption and National Security.

While acknowledging the fact that the NTA faces a death of facilities he assured the management of government continued support to enable  Africa’s largest Television Network function effectively
in the service of the federal government and the nation at large.

NTA’s director general, Yakubu Ibn Mohammed said he led the management to the SGF to assure him that NTA is in tune with the change agenda of the present administration.
The director general solicited more assistance to  NTA to surmount its operational challenges in terms of facilities in its over 100 stations nationwide if the organization must sustain its twenty four hour uninterrupted service to the people