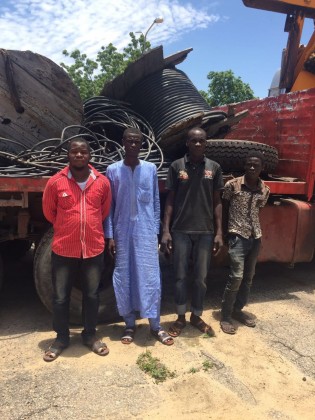 Sani Kukasheka Usman, Abuja: Troops of Operation LAFIYA DOLE on patrol at the outskirts of Maiduguri metropolis, Borno State at about 1.20am today, arrested 4 suspected vandals of critical national assets in the area.

The patrol team, intercepted Aliyu Jubril, 24 years old man, who is also a member of National Youth Service Corps, Ismail Baba, 22 years old and a student of Ramat Polytechnic, Mohammed Suleiman, aged 25, a driver and Mohammed Bukar aged 15, and assistant to the driver, at Silo along Maiduguri-Damboa road while attempting to cart away heavy armoured cable belonging to Power Holding Company of Nigeria (PHCN).

The four suspects all men are being interrogated and would soon be moved over to the appropriate security agency for further action.