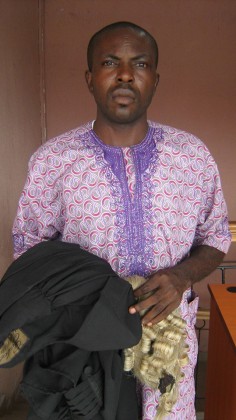 Operatives of the EFCC have arrested a fake lawyer, Thankgod Okachi Echem in Port Harcourt, Rivers State, for defrauding his “client”, a sum of N7,000,000.

According to the EFCC Spokesman, Wilson Ujuwaren, Okachi confessed to be a School Certificate holder, was arrested based on a petition to the EFCC by one of his “clients”: Mr. Jonny Wali alleged that the fake lawyer defrauded him of the sum of N7,000,000, being part of the money awarded him by a Rivers State High Court, sitting in Port Harcourt, as compensation in a legal battle involving him and the former Power Holding Company of Nigeria (PHCN) now Port Harcourt Electricity Distribution Company.

In a related development, the EFCC is notifying the public that Messrs Johnson Olusegun Salako and Benedict Peters, whose photographs appear blow, are wanted by the EFCC.

50years old Salako is wanted for alleged fraud. He is dark in complexion, speaks Yoruba and English language fluently and his known address is No. 6 Adeola Odeku Street, Victoria Island, Lagos.

Dark complexioned Peters is wanted in connection with a case of criminal conspiracy, diversion of funds and money laundering. He hails from Abakiliki LGA of Ebonyi state. His last known address is No. 8B Agodogba Avenue, Parkview Estate, Ikoyi, Lagos.